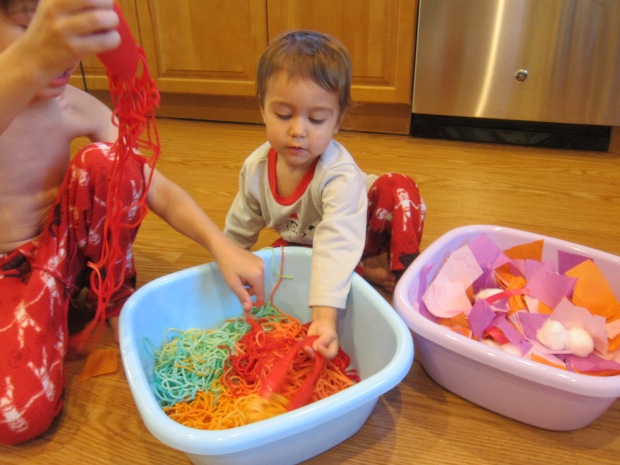 We found an old play set with components to make a pretend salad: fake lettuce, croutons, olives, etc. Veronika loved it so much I thought it would be fun to help her make a few more “salads”. These two methods were quite different, but both so enjoyable. 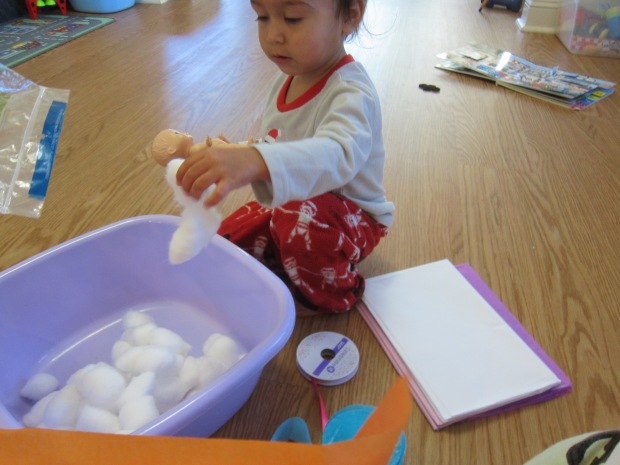 For the first version, I put together odds and ends from the craft bin that she could toss like the ingredients of a salad. We had tissue paper “lettuce”, cotton ball “croutons”, strips of ribbon (bell peppers perhaps?) and pieces of crepe paper. 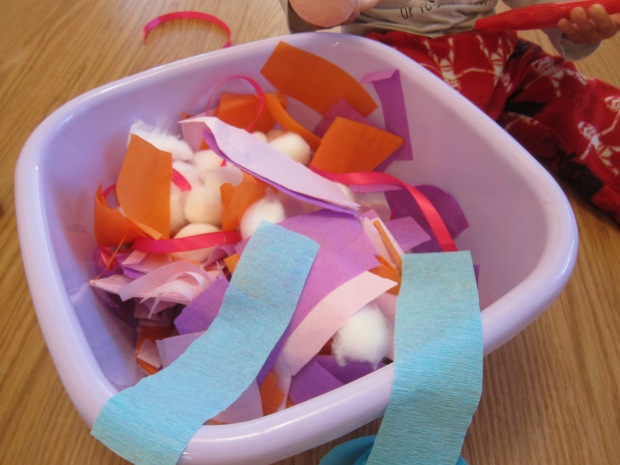 I gave her toy tongs as well as real tongs to toss the ingredients around. The tongs were arguably as interesting as the sensory materials!

Then we moved on to an edible sensory version. The night before, I made a batch of Kool-Aid dyed pasta. To keep it edible, just in case Veronika wanted to take a nibble, I diluted each pack of Kool-Aid in 2 tablespoons hot water (as opposed to rubbing alcohol). Place 1 cup of cooked spaghetti in a gallon-sized zip-top bag for each color that you’ve prepared. Pour in, seal, and shake to distribute the color evenly. Open the bags and let the pasta dry out overnight.

In the morning, I heaped together all the colors of noodles in a craft bin for a big “salad”, and once again handed over the tongs.

This was an instant hit! She needed a little help at first since the noodles were sticky, but then loved scooping them into a smaller bowl.

Big brother immediately needed in on the action, too. He soon had created a big spaghetti “cake”!

Then he wanted to try snipping the spaghetti with scissors, which is how bits began ending up all over the floor.

Veronika, meanwhile, was narrating her play, something about trucks and cars. She was pleased as punch with whatever she thought she was “making”. 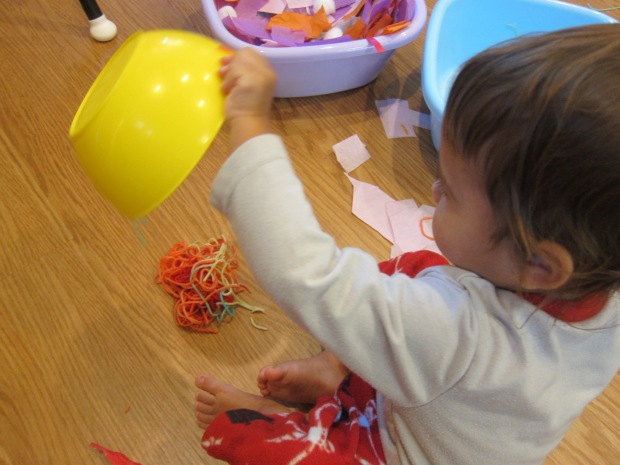 And then she discovered the joy of simply throwing the spaghetti on the floor to make it go splat.

My two crazy sous-chefs did then decide to sample the salad. “It’s tasty!” Veronika announced. They told me blue was the yummiest. I was glad it was just a few nibbles.

Clean-up was a bit more of a pain than usual. Next time I would probably do this activity outside and hose down the patio afterward, or lay an old shower curtain liner on the floor if doing it indoors. But worth it? Yes! 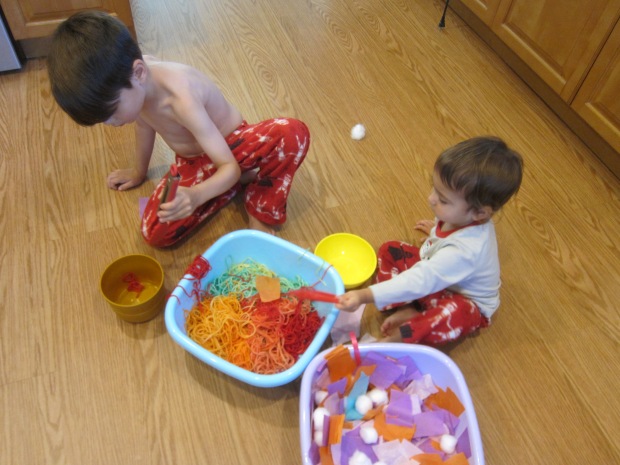 Veronika has loved working with a big canvas for art lately, so today I wanted to find a novel way to let her fill a big sheet from the craft paper roll. Instead of paintbrushes, we crumpled up newspaper from the morning’s news!

I put a few fingerpaints onto paper plates, then crumpled up the newspaper. I showed her how to dip one end in the paint and press onto the paper. 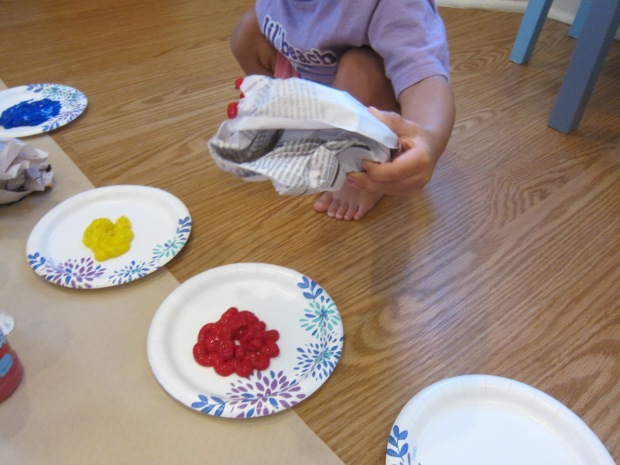 She certainly thought it was funny but she seemed a little hesitant to try herself. More fun was turning the plates upside down to see if the newspaper would stick! 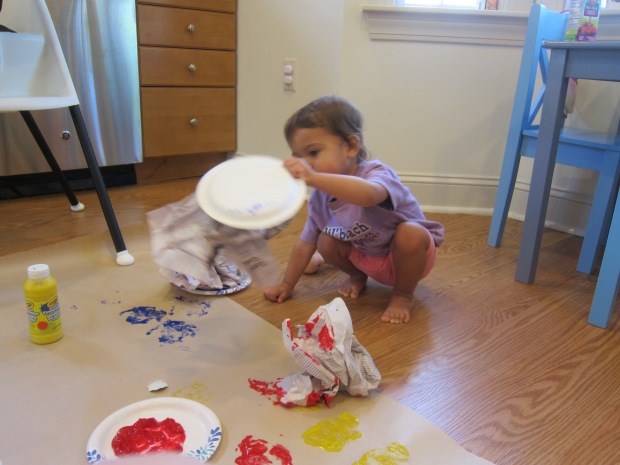 I realized that the wads of newspaper were much too big for her little hands. Making smaller crumples was the solution.

We ended up with neat dots all over the paper and set it aside to dry. This looks like it would make beautiful homemade wrapping paper, so we’re setting it aside for upcoming birthdays! 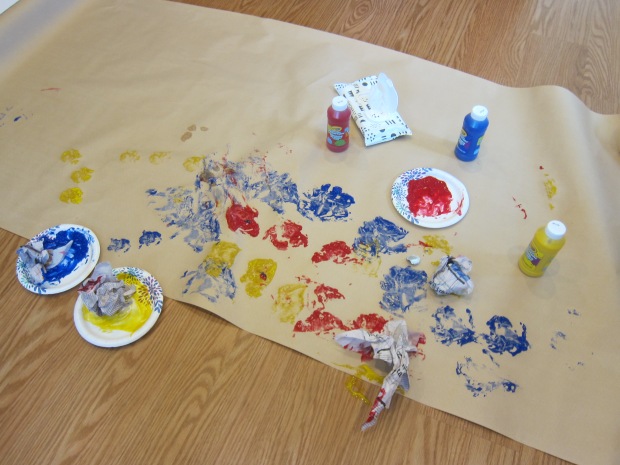