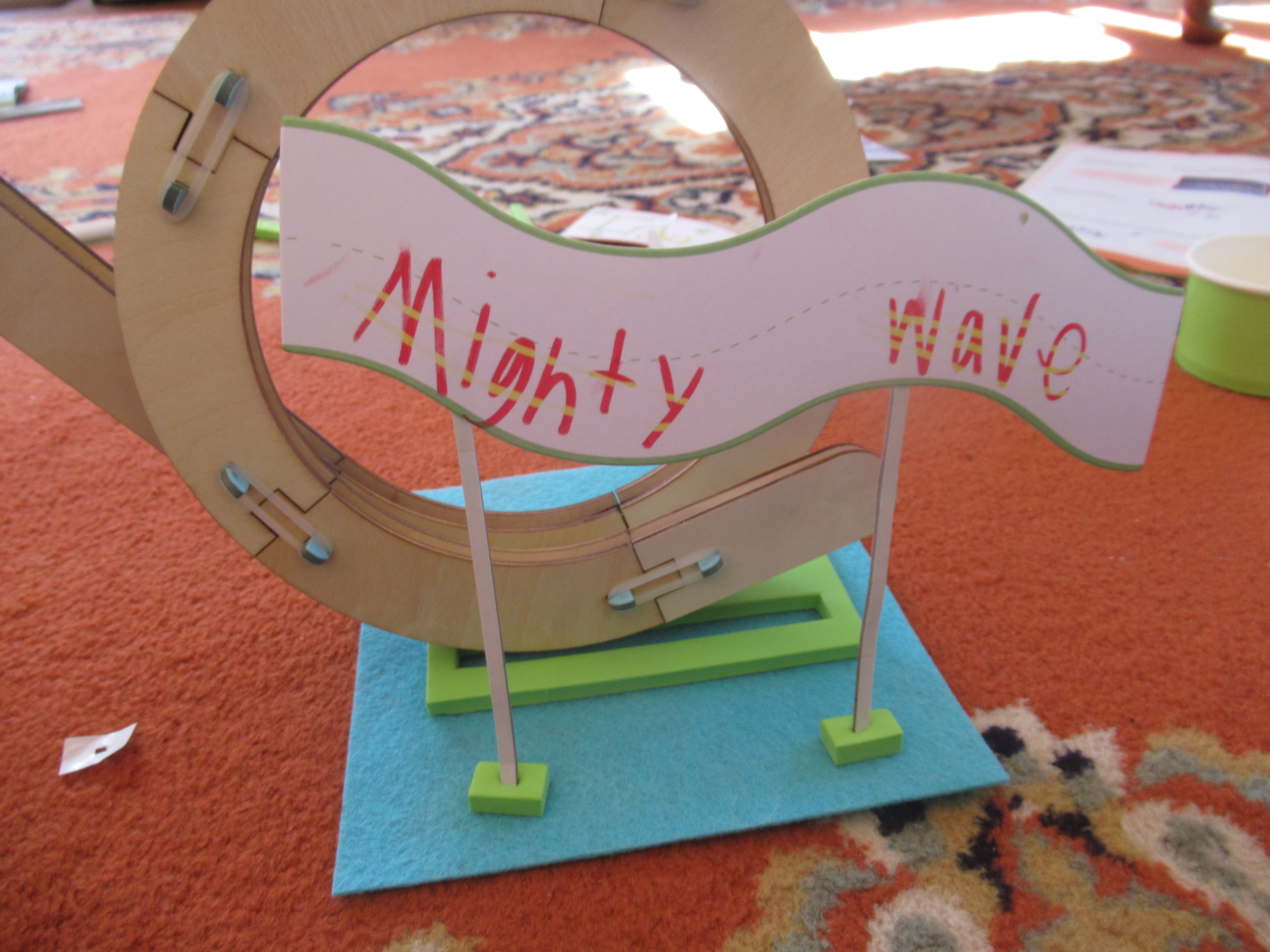 A day off from school was the perfect opportunity for STEM fun in a roller coaster crate from Kiwi Co., focusing on the scientific concept of centrifugal force.

The first project, obviously, needed to be the Roller Coaster itself and this one was heavy on woodworking and engineering.

Travis lined up all the pieces to make sure we had the right number of each part (some with notches, some with slots, etc.). These attach with wooden connectors, followed by spacers, followed by a second layer of the wooden track, and then it’s all held together with clear rubber bands. To be honest, the pieces were tough to notch together and Travis grew frustrated after doing the first couple connection. Luckily mama was on hand to help out – and little sister, too!

Once the track was complete, we placed a water bottle inside the empty Kiwi box, and turned it upright. A wooden track mount notches into the ga; on the side of the box, held in place with a wooden rod and more rubber bands.

The roller coaster sits on a foam and felt base. Time to release the provided silver marbles and watch them loop the loop! Kiwi also provided a paper cup to aim for, and it was fun to move it closer or further until the kids could make the marbles land just right. Travis enjoyed launching the marbles, but the track is very wobbly and needs to be just right for the marbles to stay on it.

For some artwork after all that engineering, he made the Roller Coaster Signs. The kit included color-changing markers; write your roller coaster name of choice on a cardboard sign, then flip the marker around the white tip. Green becomes yellow, purple becomes blue etc., which got a big wow from the kids.

This being Kiwi Co., they even included a “name-o-matic” game of chance for kids to use. Roll a dice and match the pips to an adjective or noun. We ended up with a coaster named the Iron Fury! The signs then stand up with cardboard posts and a foam base, which was also wobbly and another slight criticism of this particular crate.

Finally, Travis made a Spin-o-Tron. Attach foam bumpers to a wooden stick and place two small white balls inside.

If you spin the stick between your hands, the white balls sit in the notches on either side of the bumper thanks to – you guessed it – centrifugal effect again.