Summer is the perfect time to give kids a visual of how the sun moves across the sky during the day. Here are two ways to mark off the hours and watch the shadows move!

For our first sundial, we poked a straw through a paper plate, and set it securely between two planks of a back deck (alternatively, place in the yard with enough dirt around the straw to hold it firmly in place).

It was early when we started, a long 9 a.m. shadow, which Travis helped mark off.

We had to work around the sun a little bit (which disappeared behind the clouds a few times), but as we added hours, Travis could see how the shadow not only was shortest at mid-day, but also moved around the plate in a circle.

For a full-body experience, turn your child into the sundial! Sketch their outline with chalk at various points of the day, noting both location and length.

After a full day’s cycle, they’ll be able to see how shadows move. 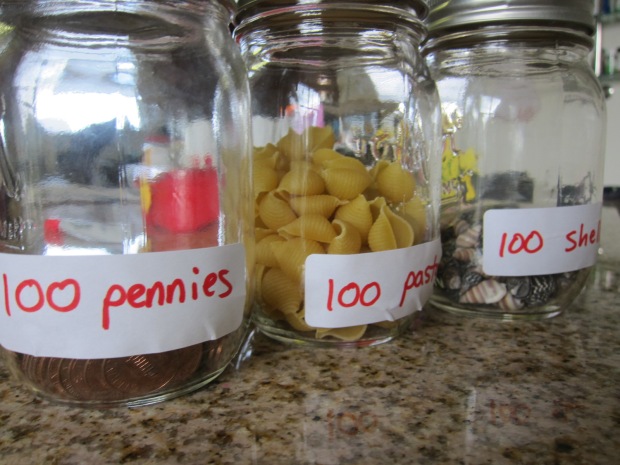 Back-to-school is just around the corner, and this activity is a fantastic way to get preschoolers and kindergartners thinking about numbers up to 100, as well as concepts like counting by 5’s and 10’s. All you need are a few empty glass jars and objects you already have around the house!

First I asked Travis if he could think of anything we had in the house that would number up to 100. He guessed toy cars (which might be true!) but I knew 100 cars wouldn’t fit in a jar.

I suggested we try coins, and soon we were emptying out his piggy bank.

He quickly latched on to the idea that 10 groups of 10 would give us 100. I helped him count out 10 coins into each group, and then we counted the groups up: ten, twenty, thirty, and so on. Filling the jar was super exciting.

Dried pasta was a bit hit to count for the next jar!

This also showed him that 100 pasta shells took up more space than 100 coins.

This time we grouped them into 20 groups of 5. He had a hard time following as I counted up by 5’s, but it was a good foundation to lay. 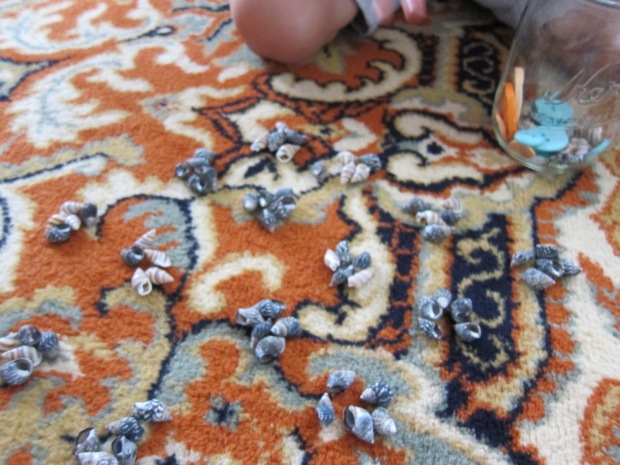 In sum, this is a cute way to get your little one thinking about math, and so easy you can sneak it in between dinner and bath time! What do you have 100 of in your home? Please share in the comments!