There are so many subtle ways to sneak math into your child’s summer to avoid the “summer slide.” Here are just a few Travis has enjoyed this summer, in the bridge between pre-K and Kindergarten, without even realizing I was helping him with his math skills!

Counting: How Many People?

Every once over the course of a day or a week, stop and ask your child to quickly tell you how many people are in the room. You can do this when the number is small (say, at home in our living room), or large, as when we found ourselves in a playspace. The playspace was fantastic because the number kept changing over the hour or so that we played there, making Travis count as high as 12 at one point.

Travis has fought me on requests to clean-up lately, but not so on the day I announced a challenge. Could he pick up ten toys exactly? Immediately, he was racing around and counting out loud. One, two, three went into a toy bin. 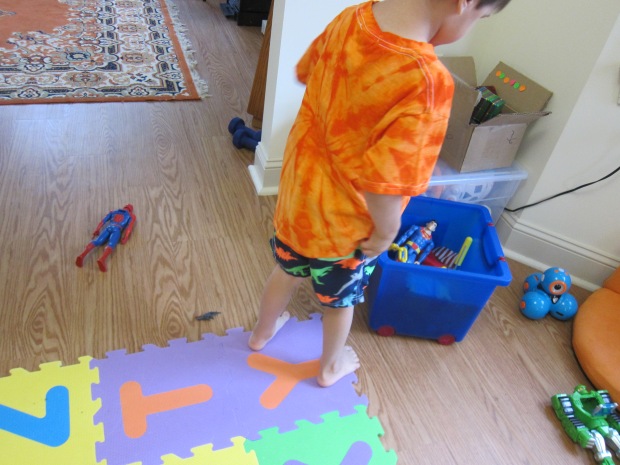 A huge battle between action figures and bugs was going on over by the piano. This gave him numbers four, five, six, seven, eight, and nine. He could barely hold them all in his excitement.

“I need one more!” he exclaimed, realizing all his toys were now put away. I told him he could be a super-helper and clean up one of baby sister’s toys. Ten!

I told Travis I needed his help on a recent big laundry day. As each load came out of the dryer, we made piles. Baby sister things, Travis things, mommy things, and daddy things.

It soon became a silly joke, since we seemed to have a load that was almost entirely daddy clothes and very few Travis ones.

“Did you forget to get dressed this week?” I teased him. Well he thought this was just hilarious, and soon was happily tossing clothes into the right piles. 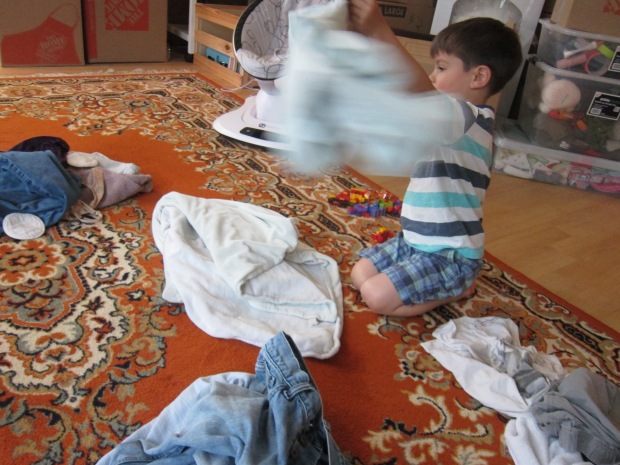 When we had finished, I asked him who had the least clothes. For this load, it turned out to be baby sister. Who had the most? Daddy!

He loved the game so much he couldn’t wait for a repeat as loads two and three came out of the dryer. I plan to enlist him as my helper for as long as I can con him into this!

For the occasion, I bought Travis a new toy register (an early birthday gift), which added to his excitement. We grabbed a few real food items from the pantry and added price tags. 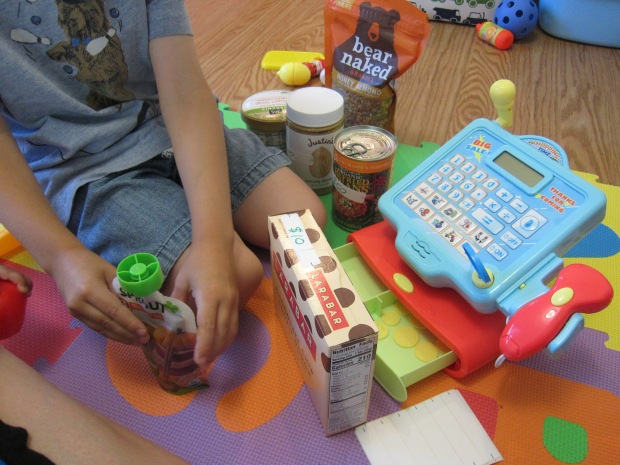 Based on the denominations in this particular register set, clearly our grocery store suffered from inflation, ha. 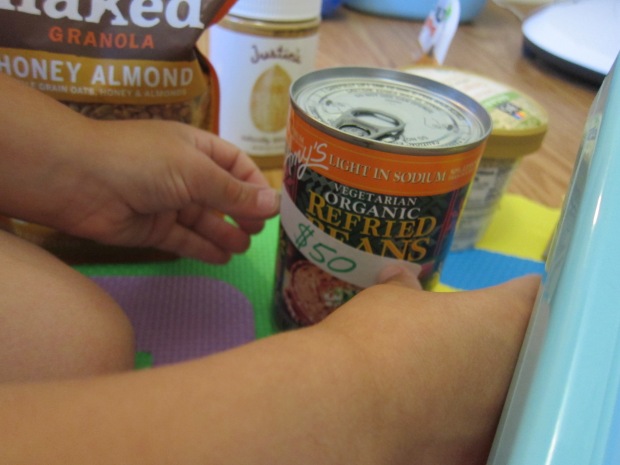 As we played, we talked about prices, and learned which bills or coins added up to which totals.

Realizing that things were a bit strange with the fake coins in the register, we next played using real quarters.

You can talk about how there are 100 cents in a dollar, and the value of one, two, three, or four quarters. It was a lot of information to send his way, and I knew all this was a bit over his head, but it never hurts to have an intro!

At dinner, do a quick pop quiz. What shape is the plate? A circle!  What shape are the napkins? Rectangles! How about the leftover quesadilla? A crescent!

You can also take this opportunity for some quick counting, i.e. how many green beans are left on your plate or how many utensils.

As your child cleans up the room, announce that they have to shout out the shape (and color, too!) of each toy they clean up. 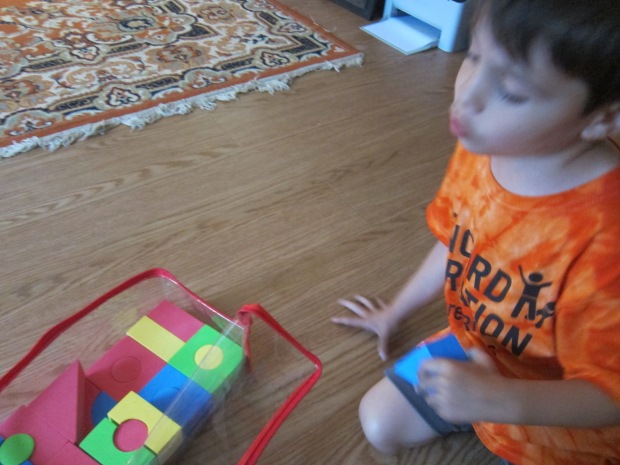 I turned it into a hunt for Travis, and I’ve never seen this set of blocks get so willingly cleaned.

It worked well with baby sister’s beads, too… and even alerted us to the fact that a couple were missing! 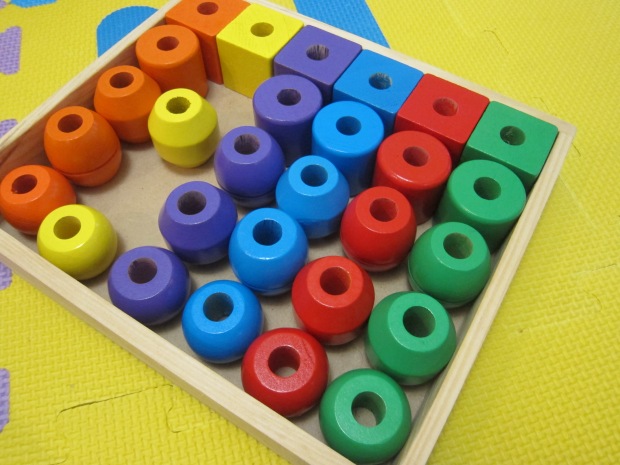 Fractions, Measuring and Estimating: Get Cooking!

Get kids measuring, scooping, pouring, and leveling in the kitchen, and they’ll be getting a math lesson without even knowing it. Although fractions are a bit advanced for kids entering kindergarten, just hearing the terms “a third of a cup” or “half a cup” will expose them to the idea of dividing one whole into smaller portions.

Cooking is also great for learning equivalents (3 teaspoons = 1 tablespoon), relative sizes (a tablespoon is bigger than a teaspoon), and reading larger numbers (350 degree ovens). Here, I asked Travis how long our recipe needed to bake. “20 minutes!” he reported.

Another great laundry game: Fold your laundry, but leave the socks in a big pile. When Travis came home one afternoon, I said to him, “Oh no, the socks ran away from me!” 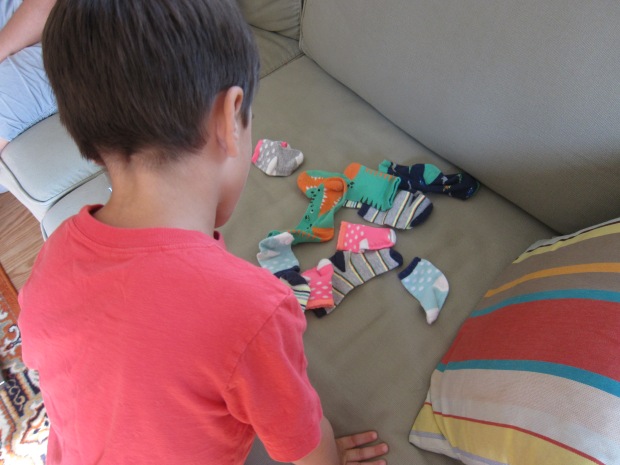 He thought the idea of the socks having escaped the laundry pile was very silly. In no time at all, he was matching them up.

A few (similar striped patterns, for example) fooled him but a moment, but then he had things all matched up.

Invest in a thermometer for outside your home or on your patio, and have your child read it every morning.

This has become a fun ritual in our house! Because many patio thermometers don’t have all the digits listed, it has become an unintended lesson on skip-counting by twos, with each notch in our dial representing two degrees.

Legos help with fine motor skills, problem solving and planning skills, shape recognition, and so much more. There’s a reason so many towns have Lego building clubs these days!

You don’t need to join a club; just get building at home. Need I say more?

Telling the time is a great skill to work on over the summer. Invest in a good analog clock or a great book about one featuring a clock with hands that your child can manipulate. We love How To… Tell the Time from Cottage Door Press because not only does it give a nice run-down of telling the hour and half hour, but there is a fun section for kids to move the hands based on their activities each day (brush teeth, go to bed etc.).

This gave a real-life scenario way for Travis to think about the time and understand it better. There’s even a model clock to punch out.

(Note: I have yet to find a good book featuring the minutes; many focus on hours and half hours, so I added the minutes in tape to our model clock).

Measuring cups are the perfect tool for teaching about volume (and fractions, too!), and if you add colored water, your child will simply think they’re playing and having fun! 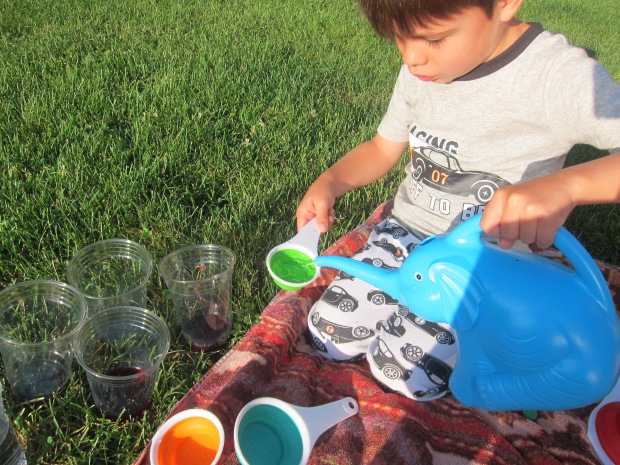 We took clear plastic cups, measuring cups, and food coloring outside one morning. I taught Travis to read the number after the slash on each measuring cup to know how many times he’d need to fill it for one full cup. So two 1/2 cups, three 1/3 cups, and four 1/4 cups. For extra fun, we used food coloring to differentiate between each version. 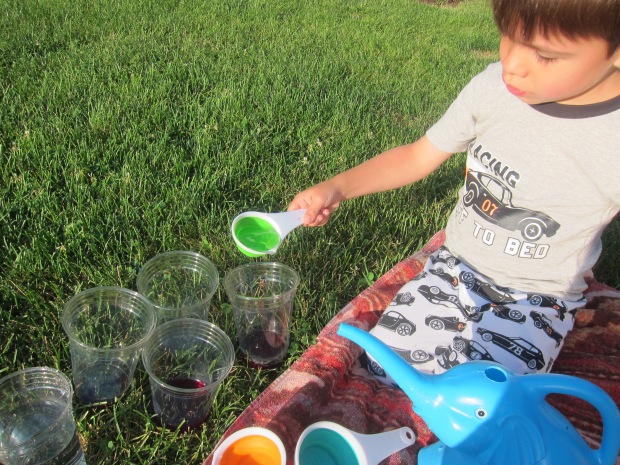 Soon he was just happily pouring and mixing and having a blast in the sunshine – vitamin d as an added bonus to math time!

At the grocery store, Travis loves to help weigh our fruits and veggies on the scale. Give a quick lesson on how there are 16 ounces to 1 pound, and let your child read off the weight of each item you place on the scale. It’s a great intro to gently introduce the topic.

Here’s a way your baby can cool off while fitting in sensory play on a hot day!

I took Veronika outside before the sun was too high in the sky, along with a bowl of ice cubes and a few tools. 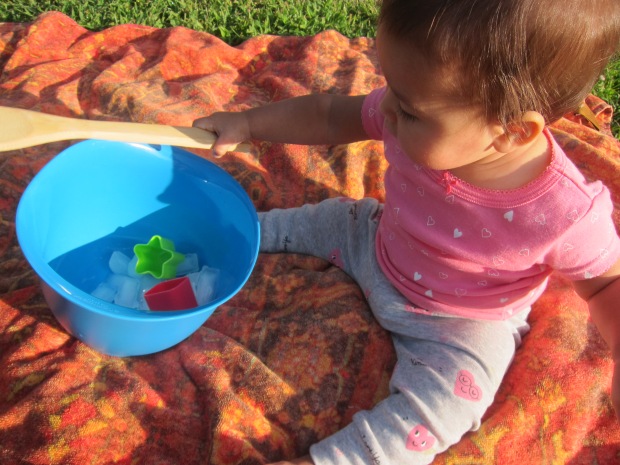 First, I simply wanted to see how she would react to the ice. Some babies may want to grab it and really get in there! Veronika seemed a touch nervous about how cold it was but liked the sensation on her toes. 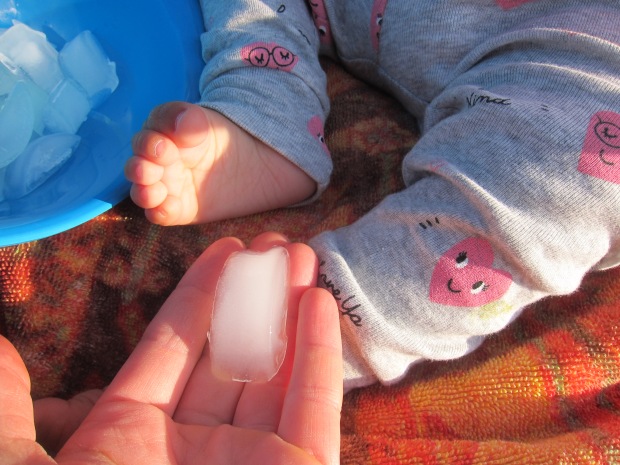 For added fun, I buried two shape toys in the ice. She loved reaching in and grabbing them out.

A wooden spoon added to the fun, too. She could “stir” the ice, or tap against the bowl. I put a few pieces on the hot patio and we watched together how quickly they turned to water.

You can also use measuring cups as scoops. These were fun for her to reach into the bowl with. Or just nibble on! 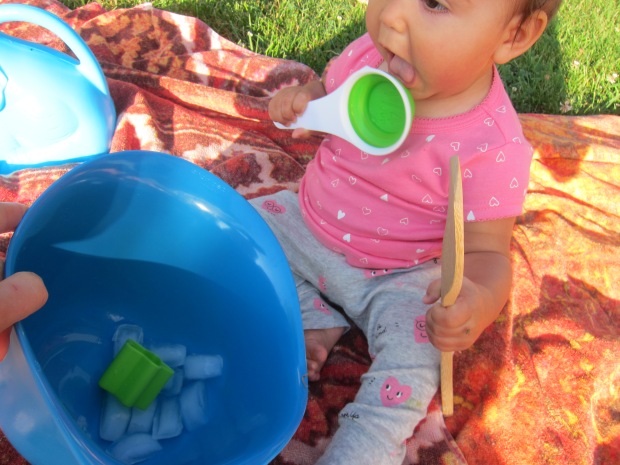 Don’t forget about sound! Put a few pieces of ice in one of the measuring cups and shake it for an auditory sensory experience.

And when you’re done, clean-up simply means dumping out the ice to melt in the grass! 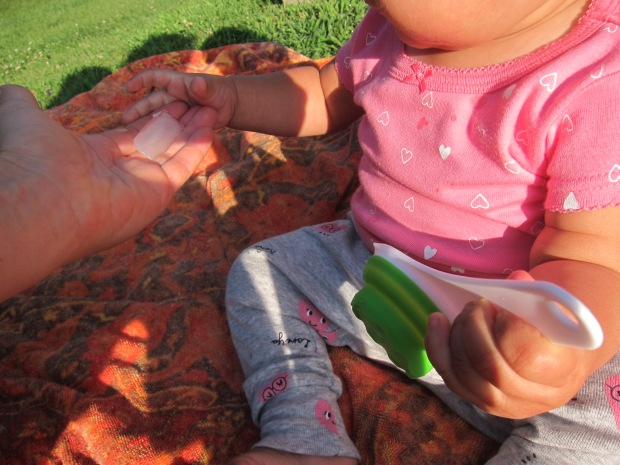 Happy National S’mores Day! Travis and I celebrated with a STEM take on this classic summer treat: s’mores cooked in a solar-powered oven made from one of his recycled Kiwi Crates!

To start, cut the flaps off the top of the Kiwi box (or an old shoebox). Line the entire inside with aluminum foil, and secure with clear tape. 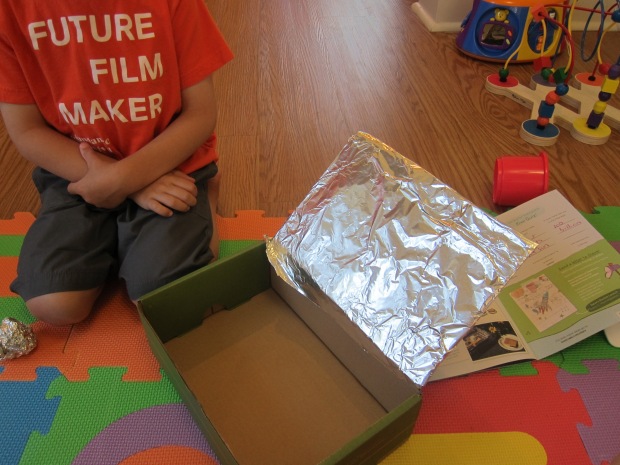 Place 4 graham crackers on the bottom; we love the vegan and gluten-free grahams from Kinnikinnick.

Top two of the graham cracker pieces with dark chocolate squares and the other two pieces with Dandies marshmallows.

Cover the top of the “oven” with plastic wrap and tape down; you don’t want any bugs in there! We placed our oven on the patio in hot sunshine.

After 20 minutes, we took a peek. Our chocolate was so hot and melty and perfect.

The Dandies had softened up, although they didn’t melt all the way down. But these made fantastic s’mores!