Welcome to the final installment of boredom busting ideas for your summer. I’d love to hear how any of these suggestions have gone for your family. Or, you can share additional ideas in the comments, because uh oh… there’s a full month of no-camp summer left.

Idea 22: Make a Mini Sundae on a Spoon. Want the best way in the world to cheer up kids who are complaining that they are hot and bored and tired? Tell them you’re going to make sundaes. But not just any sundaes. The smallest sundae in the world. Travis was gleeful as we pulled out tablespoons to use as the “bowls”.

We scooped a tiny portion of ice cream onto each spoon. Top with sprinkles of course, or cherries or any other favorite sundae toppings. Then repeat, because these are so small you can tell the kids they get to have three sundaes. Seriously, the trick will work every time. Cue up the cooled off and happy kids.

Idea 23: Play with Dominoes. If I had to pick one activity from all 26 of these suggestions to occupy my kids, this one would be it.

A set of domino blocks in all the colors of the rainbow was so worth the purchase. The kids can literally play with them for hours!

Veronika is in her own world when I set them out. “Let’s build!” she says. “Rectangle!” She’ll build up a stack of them, then knock them down and scrabble them across the floor, and then start over.

Travis, meanwhile, loves the challenge of copying designs from the box, as well as seeing how long a line he can make.

By the end of his first night trying, he could line up 20 or more before an errant fingertip made the line come tumbling down.

Idea 24: Make a Mini Town for Trains and Cars. This was another Highlights prompt that went from simple suggestion to loads of play. First we pulled out the toy trains and a box of blocks. Both kids were immediately building.

Travis designed a “farm” as little sister set to work on a tall tower. Then we added a few construction vehicles to the farm site, so now it was a construction site! Travis moved the blocks like rubble and began making his design more sophisticated. 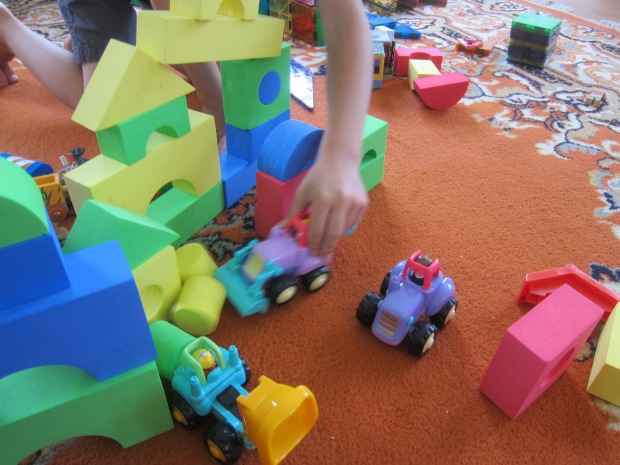 We needed a residential neighborhood down the road. Magna-tile houses soon followed!

Then we needed a train station for the train to pull up to.

Then all the toy cars came out, so we needed roads! Masking tape did the trick.

Pretty soon it was a thriving city. 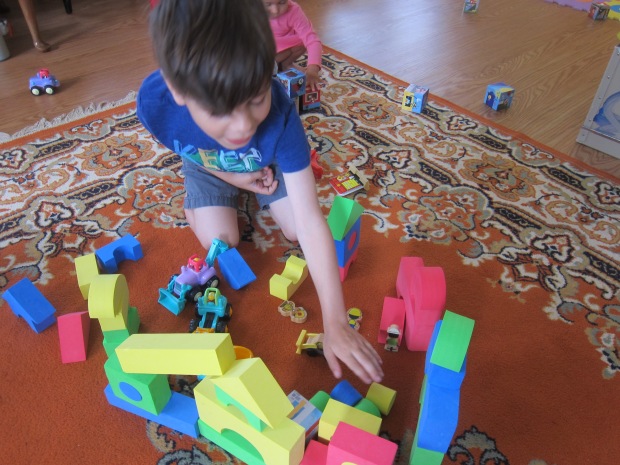 It’s a good thing I got pictures when I did because you can guess what happened next to a 6-year-old boy’s city. It was destroyed by evil Lego snakes of course.

Idea 25: Make a Time Capsule. This was a suggestion we worked on over the course of a few days. First, you may need to explain the concept of a time capsule to your kids, something you’ll create now and then seal up to open at a later date. Travis was in charge of taking pix with our instant camera!

The Instax was half the fun, though I had to direct him towards photos of things that exemplified our summer, not just silly shots of his toys. 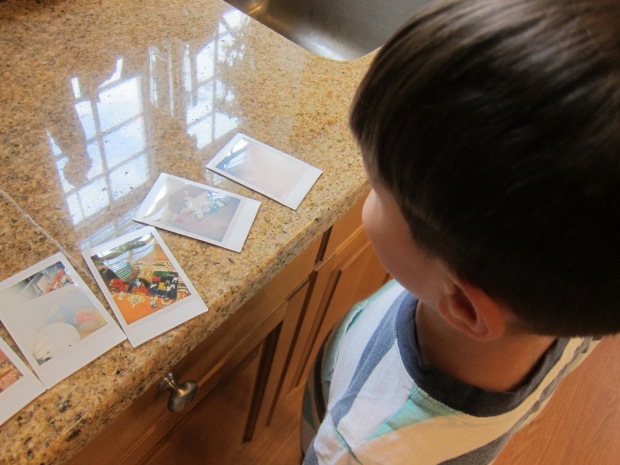 When we had enough photos, we decorated a shoebox. Travis proudly wrote Summer 2020, and drew flowers and bugs, and then we tucked all the photos inside.

I asked him if he wanted to add other summer mementos, but his answer was no. Your kids might consider tucking in newspaper clippings, tickets from museums, or anything else that reminds them of this time period. Now the shoebox is tucked on a closet shelf to open in Summer 2021!

Idea 26: Make Up Your Own Boredom Buster. Well after all that, it was now up to Travis to think of an idea! His answer? He wanted to chew bubble gum, a rare treat around here. If you have proper bubble gum, you could even turn this into a bubble blowing contest! Unfortunately, I’ve never found a vegan brand that works well for this. But wouldn’t you know it, just chewing gum kept him happy long enough for me to have a little moment of summer peace and quiet. 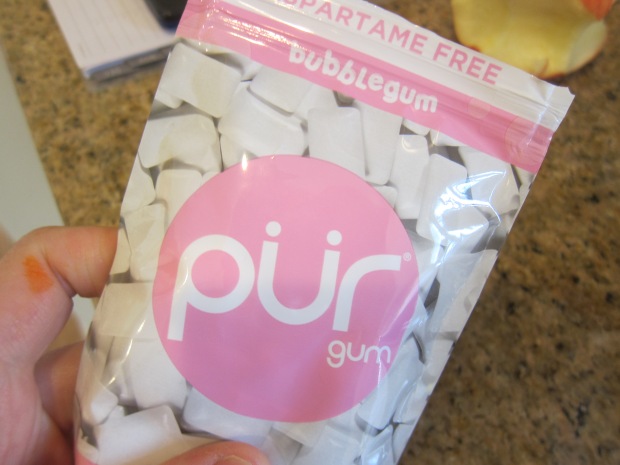 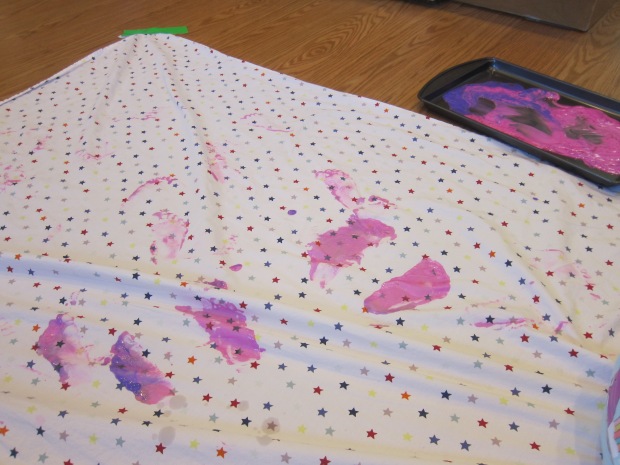 I love throwing in a sensory project for the feet now and then, such a different experience for toddlers than working with their hands! All you need for this project is an old crib sheet (or similar large piece of fabric), and a willing pair of toddler feet.

I squirted two colors of washable paint onto a baking tray and added a little dish soap to each color, which will make clean up easier in case any paint goes off the fabric.

Fill a second shallow tray with warm soapy water, and have a towel handy. Then tape your old sheet down to the floor securely at all four corners. I put on some tunes (Walking on Sunshine felt just right!) and Veronika immediately started bopping and dancing before the paint was even involved.

Then I dipped her feet into the paint and set her painted soles down on the fabric. “Let’s dance!” I said. 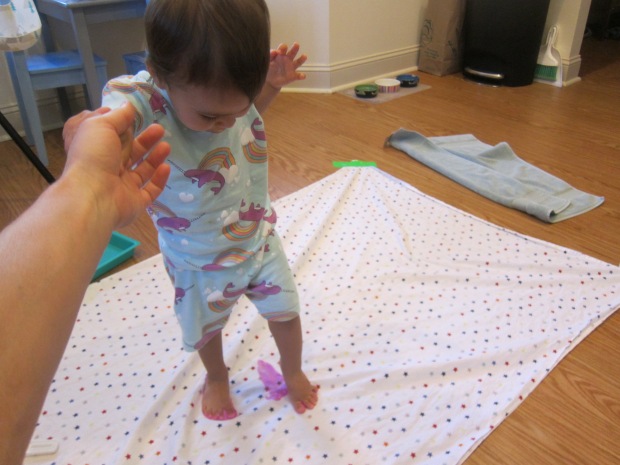 She was initially hesitant when the paint was thickest, but as she began to move around, a big smile formed. 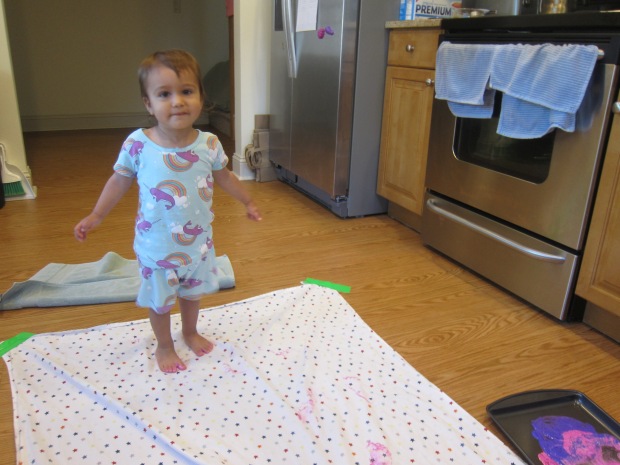 We dipped her toes and repeated a few times, and mixed up the tempo for a little music lesson, too!

Arguably her favorite part was washing off in the sudsy water at the end. At first she just dipped in her toes, but then I turned around and found her sitting completely in the soapy tray like it was a mini bathtub. Well, time for an outfit change!

This warm breakfast cereal is a nice alternative if your kids are tired of oatmeal.

Note: If the barley was cooked the night before, rewarm each portion briefly in the microwave.

You can also try this recipe with strawberries…

…apricots, or any other fruit, instead!

Is this project a healthy snack for your kids? Absolutely not. But when Travis declared mid-way through the activity that he was in paradise, I knew I’d brought some magic into a summer morning.

The idea was to show all the layers of the earth, using just about the most amount of sugar imaginable.

I laid out a tray with all of the supplies, and we talked about each layer of the earth as we worked, filling clear plastic cups with each step. First up, we needed bedrock, which I explained was the solid rock deep underground. We used a mix of mini chocolate chips and crushed ginger cookies. The crushing is half the fun; place the cookies in a zip-top bag and smash with a rolling pin until you have big crumbs. 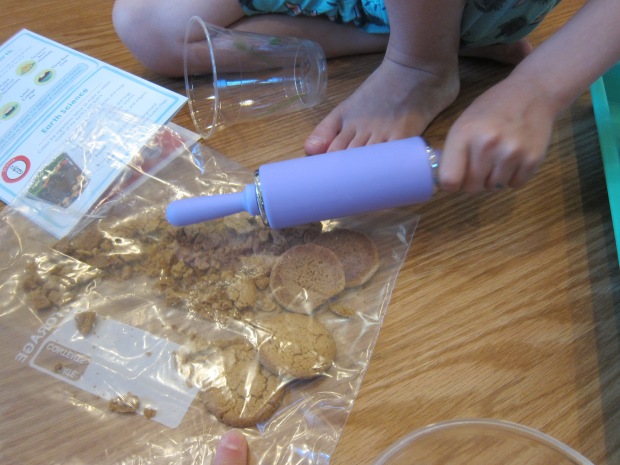 On top of this, we spooned the “subsoil” (a dense layer of clay and and iron). Chocolate pudding was perfect of course. 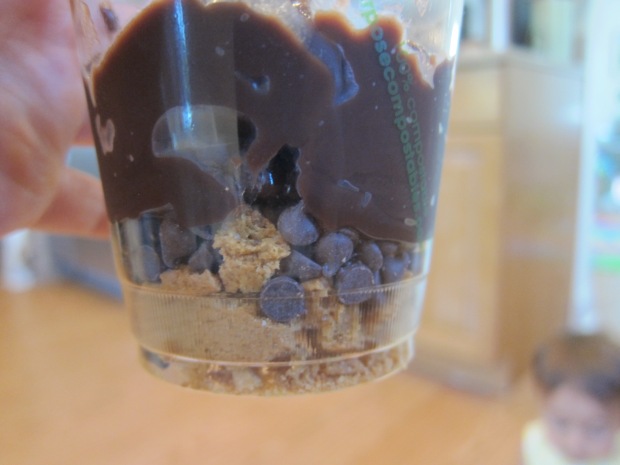 You’ll notice my taste testers had wasted no time and were busily crunching into cookies and spooning into pudding. They couldn’t believe I was letting them have this free-for-all! 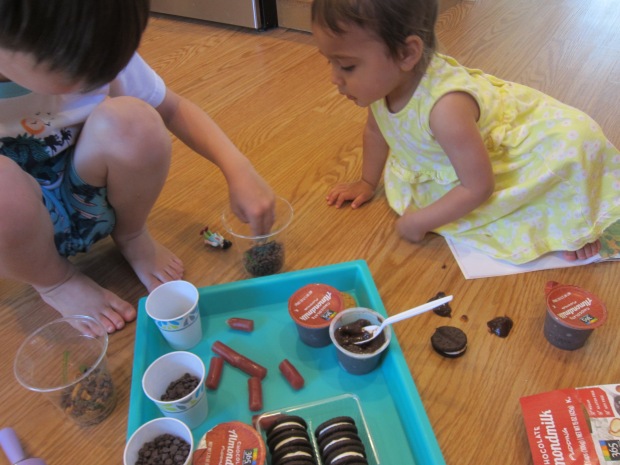 Next we needed topsoil. I explained that this is the dirt we see as we play: dirt, bugs, and minerals. Now we needed oreo cookies, but not the creme filling. I showed the kids how to scrape out the creme with a craft stick so we could crush the chocolate cookies.

“Can I eat the frosting?” Travis asked. I nodded. “Plain??” This is when he declared the activity paradise.

We sprinkled on our crushed “topsoil” and then added a few “worms”. It’s easy to find gummy worms at the store but most contain gelatin. Instead, we sliced pieces of licorice in half to be our worms. 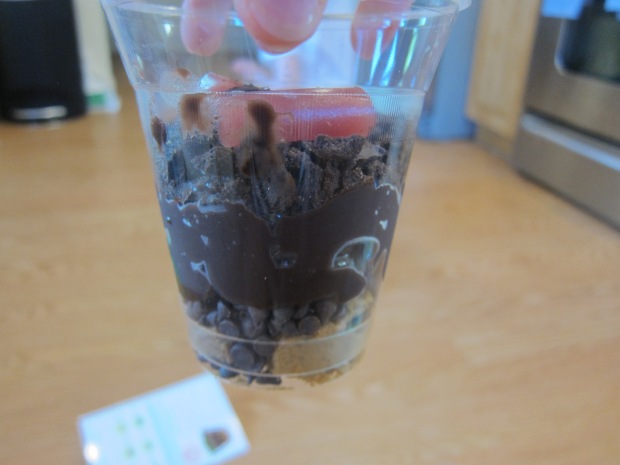 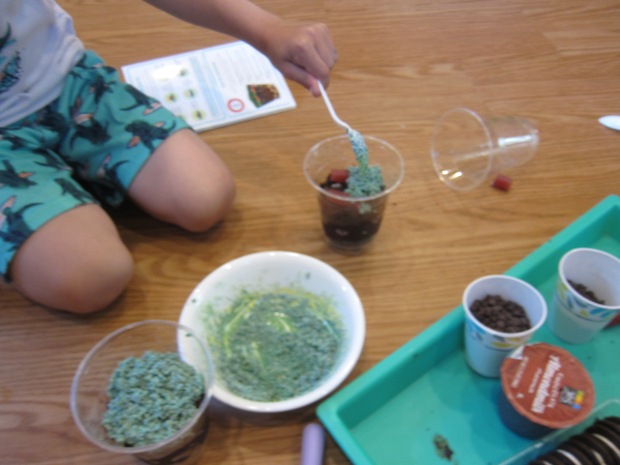 Now it was time to dig into the Earth. 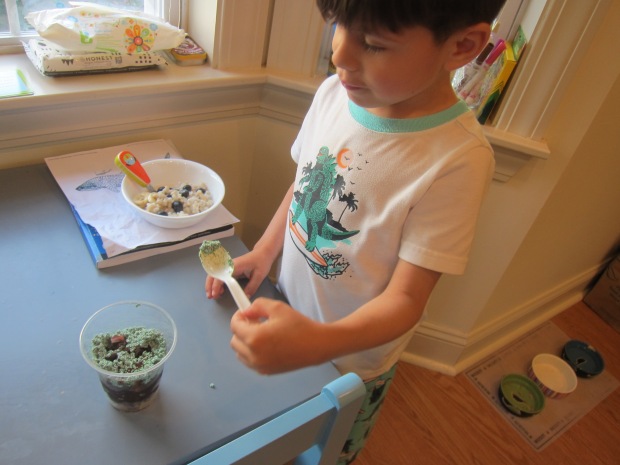 Veronika plunged her spoon right in and began snacking. It made her so happy she began to do a sugar-fueled dance around the kitchen.

Travis loved working his way carefully down the layers, almost like he was excavating. He wanted to stop and talk about which strata we were in, and carefully selected which bite should come next. He was ecstatic when he’d gone deep enough to reveal the pudding under the topsoil!

Welcome to paradise on Earth, and thanks to Raddish Kids for this great lesson.

These little race cars the perfect old-school camp activity for a summer morning at home!

For the base of each car, line up 3 jumbo craft sticks. Trim two paper straws by about one-third, and line up perpendicular to the craft sticks an inch from each end. Use hot glue to attach.

Hot glue the cap of a food pouch to a wooden skewer; let dry. Thread the skewer through one of the straws, trim the end, and hot glue another food cap. 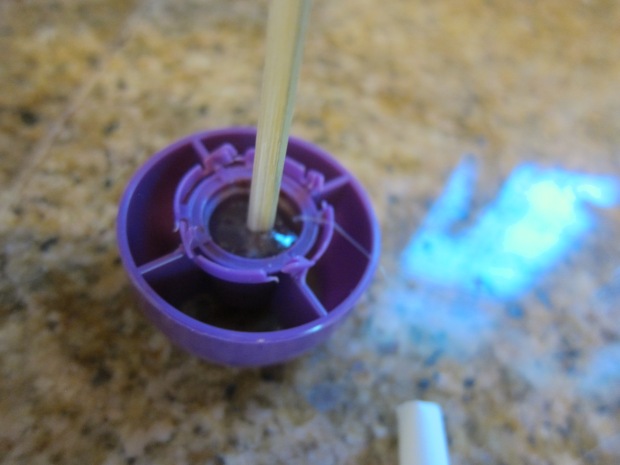 All of this hot glue work meant the set up was largely a grown-up project, but then Travis was in charge of designing the top of the car, adding a nice STEM element to the craft. Once he’d arranged the sticks as he wanted them, I hot glued them on.

Time for a test drive!

After the designing was done, it turned out that little sister Veronika enjoyed zooming the car around even more. So the whole family got to enjoy this one.

Nature is the perfect playground for children to learn in, which is a no-brainer because, of course, we evolved and learned to learn in… Nature! I was reminded again today that it’s all right there: sensory concepts, numbers, shapes, and so much more.

The first step of our project today, then, was simply to head out with a little bucket and collect anything that caught Veronika’s eye.

We paused at intervals to discuss her collection or to organize it in various ways. She loved lining up sticks on this log, for example! 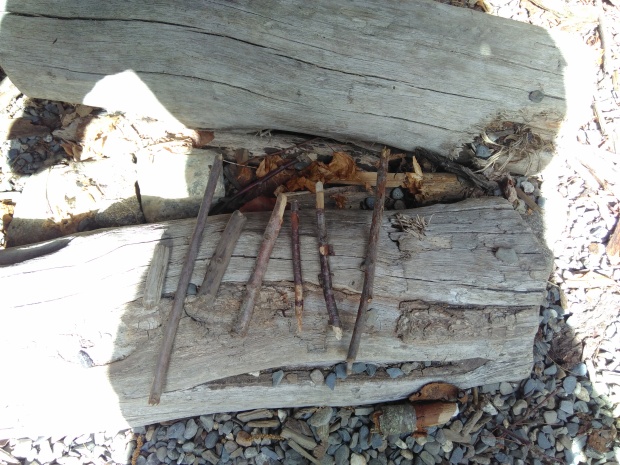 Or playing with various sizes of pine cones.

Don’t worry about curating your child’s collection. Simply add anything that he or she wants to the bucket, whether that means little pebbles (one of Veronika’s favorites), seed pods, sticks, leaves, grass, or anything else.

Once home, we didn’t even have our shoes off before she dumped the collection on the floor. 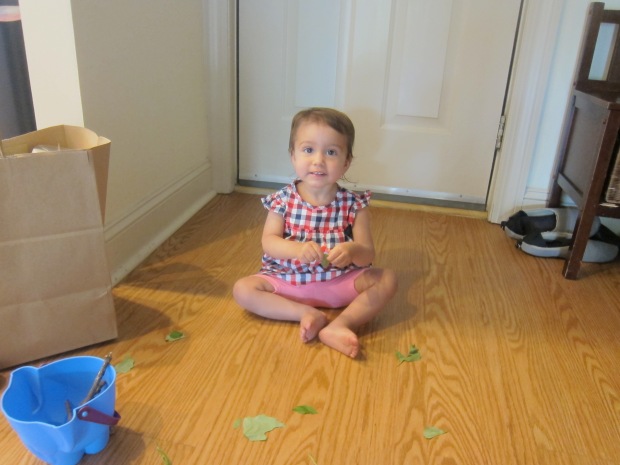 But that was just fine with me! I sat down with her to talk about everything we’d brought home. First we concentrated on size as I lined up the sticks. Could she find me the longest one? Yes!

The shortest stick? Yes! I was really happy to see her mastery of this concept.

We played around by subdividing her findings in different ways, whether by item, by color, by texture, and more. 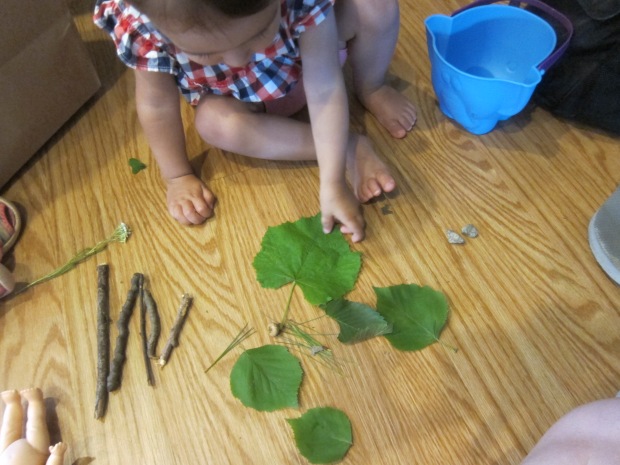 You can also use the opportunity to count. How many pebbles did we bring home? “One, two!” she told me.

How many acorns? “Just one!” Then of course your toddler is simply going to want to play with all the treasures that have come home.