Here’s a neat hack that allows a toddler to practice following lines like tracing, but which doesn’t require holding a pencil or marker: “Trace” with objects instead!

Great first letters for toddlers are always their name, since this is often the first world they’ll have to write. I like to use Veronika’s nickname so she’s not overwhelmed too many letters, so I spelled out V-I-K-A in blue painter’s tape.

Next, I showed her how to arrange our set of colored dominoes along these lines.

She caught on quickly, and although her focus often wandered (she was very interested in talking about the colors of the dominoes, too), she was easily redirected to the task and followed along as I helped her fill in all the letters. 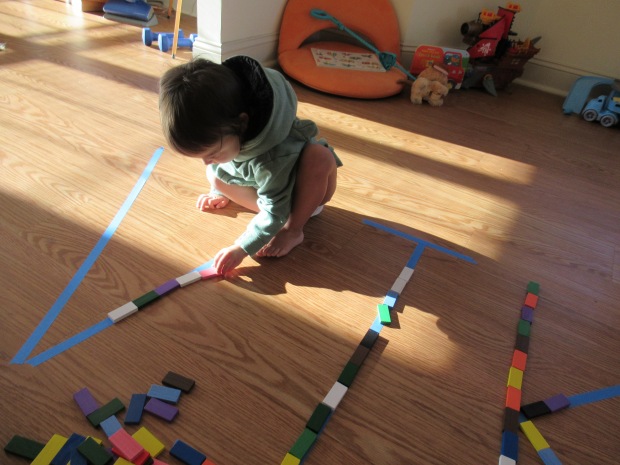 This was a great chance to say the name of each letter, too, and the sound it makes. The giant size of the tape letters definitely invited interaction! She loved standing in the empty space of the V…

…or walking along the lines of the A. In fact, you could encourage your toddler to trace the letters with his or her feet!

Just to gauge where she’s at with pen control, I did give her a marker at the end of our play to see if she wanted to follow the big lines of tape with it. She preferred drawing small circles or loops on the tape instead, so we’re not quite there yet! 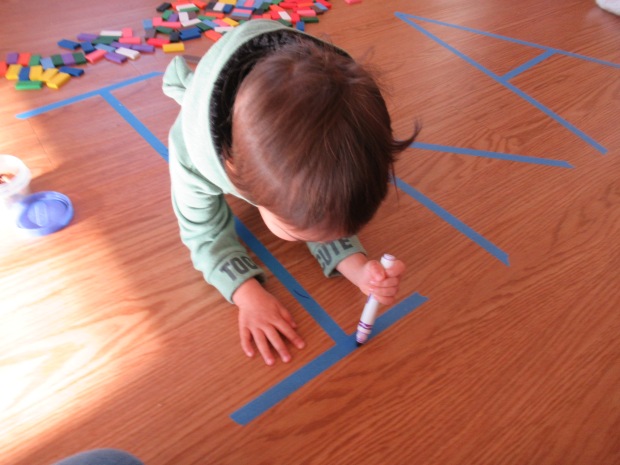