Only three weeks remain in our Letter of the Week journey! Travis has come to love discovering which letter I’ve posted to our wall, and asks all week if a song, food, or game is “special for ___ week.” I love the way this curriculum has built his understanding of the connection between letters and words. Without any further ado, here was our D week. 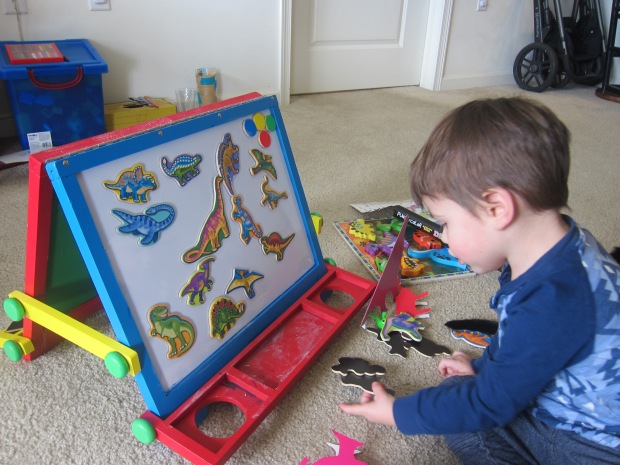 Dinosaur: What didn’t we do with dinosaurs this week? I pulled out all our dinosaur toys, which meant magnets, punch-out paper dinosaurs, miniature dinosaurs, dinosaur puzzles, dinosaur stickers, dinosaur coloring books, and dinosaurs stories to cuddle up with like That’s Not my Dinosaur (while wearing dino pj’s of course!)

Dino crafts included a rather awesome Dinosaur Egg which merited its own blog post, and then we dug for “dinosaur bones” (i.e. popsicle sticks) in a mixture of flour and salt that looked a lot like desert sand.

After digging, glue your “bones” together into a dino skeleton!

Dominos: Children will delight in the chain reaction of dominos if you set them up, and manipulating the tiles is great practice for little fingers. You can also help tots line up dominos with pips that are alike for an early math lesson.

Dogs: Travis played with the stuffed animal dog toys we have, but then I decided we should visit real dogs at a local animal shelter for our field trip of the week. Even though we can’t currently adopt, it’s nice to spend time with animals who may have been caged for quite some time. Ask if there are older, gentler dogs who might like a little playtime in a room with a family. Your child will love the interaction, and get an early lesson in compassion!

Doctor/Doll: I’m combining these two words, because if a doll comes out in our house, it’s probably going to get a doctor’s checkup. To keep things novel this week, we made a doctor’s hat for Travis! Fold two pieces of white paper into thirds lengthwise, then glue them together so you have one long band. Cover a circle of cardboard with foil, and glue this to the center of the hat.

Dr. Travis was so proud to wear it! 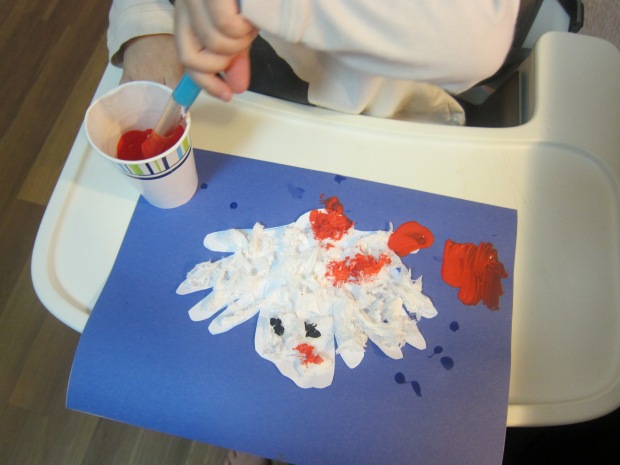 Duck: There are so many darling duck books to choose from (starting with Make Way for Ducklings by Robert McCloskey, and Little Ducks Go by Emily Arnold McCully). We read those stories and followed up with a little white duck craft.

Dance: We dance a lot in this house, but we played two games this week to make things different. First, I gave Travis a stuffed animal and showed him how to dance with a partner – he loved it! You can also play a game of dancing statues, freezing the music on occasion and seeing who can hold still until the music starts again.

Disappear: Here’s a sleight-of-hand trick that might not fool older kids, but tricks a toddler! Press a piece of foil over a coin so you leave the coin’s imprint; carefully remove the coin. Place the foil in your hand and say you’ll make it disappear. Hold a piece of paper over your palm with a magic chant or two, but then “fail” to make the coin disappear. Repeat again. On the third try, get frustrated and crumple up the paper; the foil gets crumpled too and voila – your coin has disappeared! “Again!” Travis requested.

Fine art: Our art this week was simple: I have yet to meet a kid who doesn’t like dot markers, so we made lots of dots. You can have your child dot at random, or draw outlines for them to fill in, like flowers, shapes… or the letter D!

Food: Travis dined on dates and dill pickles, and then we made a special excursion for a vegan donut at a local bakery. 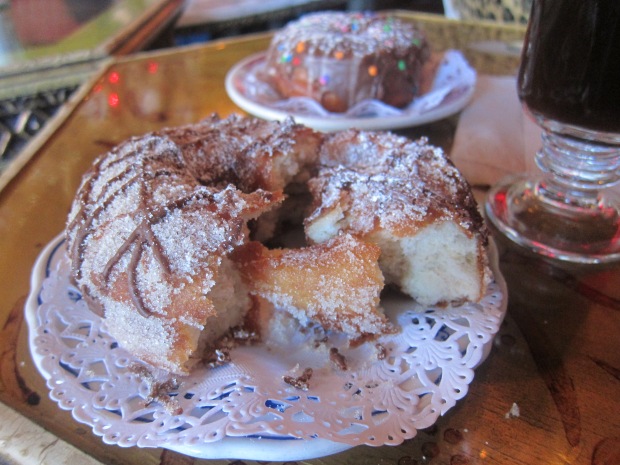 Books: In addition to dinosaur and duck books, we read I Love My Daddy by Sebastian Braun, My Pet Dragon by Christoph Niemann, James the Dancing Dog by Linda Maybarduk, and Give That a Dog a Bone by Steven Kellogg

Songs: Little Baby Bum has cute dino songs, like Ten Little Dinosaurs, and Travis loves stomping to Laurie Berkner’s We are the Dinosaurs. Hey Diddle Diddle features lots of great Ds, beyond the title; don’t forget the dog laughing and the dish running away.

Math: Ambitious: I taught Travis that one dozen equals twelve. He still gets a little muddled counting objects higher than eight, but when I ask him how many are in a dozen now, he knows the answer is twelve!