Welcome to our fourth journey with Little Passports‘ Early Explorers kit! This month we had goodies waiting in the mailbox about famous world discoveries.

This topic was a bit difficult for three-year-old Travis to grasp, so I worked on finding ways to make the information relatable and closer to home. The kit covers (literally) monumental moments in world history, from the caves of Lascaux to King Tut’s tomb to the terracotta warriors of China (which I didn’t learn about until college – Travis is officially 20 years ahead of me).

I talked about each discovery as we found where they belonged on our world map, but could tell he wasn’t much interested yet. The activity booklet provided an overview that was largely lost on him, though he did enjoy the maze puzzles and games. Then we moved on to a few hands-on activities, which helped make things more relatable.

After reading to Travis from the booklet about the Lascaux caves, we made our own cave art! Cut a rectangle from a paper bag and crumple up (good fun), to make your cave “wall.” 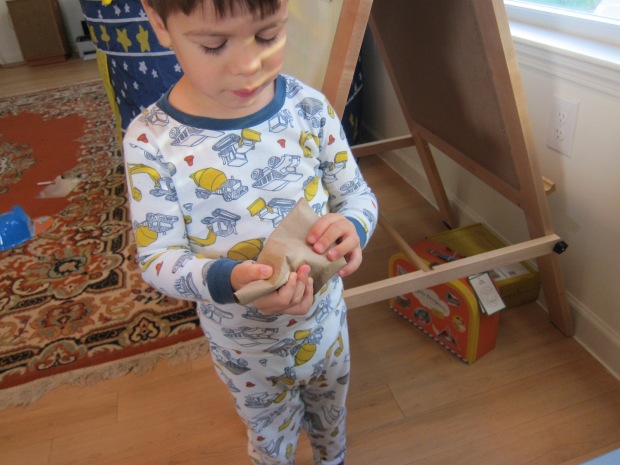 To capture the texture and materials of cave art, draw outlines of animals or figures in chalk. Travis said he was drawing a “cow”, but he found it difficult to make the chalk show up on the brown paper. I helped him with outlines and we ended up with something sort of resembling a deer and one more like a cow.

We then used paint in cave-painty shades (brown, black, beige, and red) to fill in our drawings. I loved the way Travis’s cow turned out, clearly all his own! I made the deer with a few stick people as another example for him. 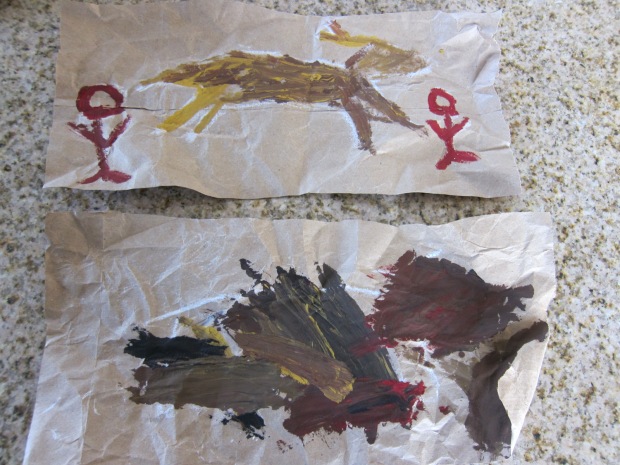 The whole concept of discoveries was still a bit lost on Travis, so I brought it closer to home with a few tools a discoverer might use – a flashlight, binoculars, and a compass. Not only did we find a neat toy compass, but we also snagged this idea from Little Passports’ blog on how to make your own compass, if ever lost in the woods (or, er, on the playground).

Fill a small dish with water; set aside. Rub a magnet in one direction along a needle several times to “charge” the needle. 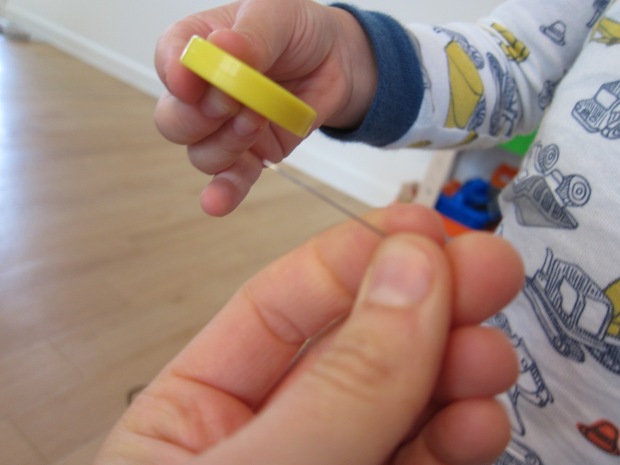 Place the needle on a leaf, and carefully float the leaf in your dish of water. After the leaf settles, it should point north! We tested it against our real compass, and it seemed to be working pretty well.

The keepsake from this month’s kit was very clever; Travis had to be a “discoverer” and put together puzzle pieces before he could see the map of the world upon completion.

As a small gripe, the puzzle didn’t lie flat, with some of the pieces popping apart, which frustrated Travis. Still, it was a great visual for where the discoveries occurred around the globe.

There was no suggested visit in this month’s booklet (which makes sense since most folks aren’t going to jet off to the Great Pyramids). One possible idea is to take your child to a local archaeological site or natural history museum and check out artifacts from ancient civilizations. We decided to go some place Travis could be an explorer… a dinosaur archaeology site! Conveniently located near family members, we made a weekend of it before spending the morning at Dinosaur State Park outside Hartford, CT.

Yup, those are real dinosaur footprints that a man discovered in the 1960s while digging with a bulldozer.

Travis went nuts checking out fossils with a magnifying glass.

A great way to show that the most mundane day can lead to the next great discovery in archaeological history!

Alas, without jetting off to those Great Pyramids, there wasn’t much more to do for this one, but we still had some fun. Setting off with our toy compass, we staged a treasure hunt around the house (we used a few missing puzzle pieces from our kit’s keepsake). I hid one piece each in roughly the east, north, south, and west sections of our apartment, which Travis found exciting. 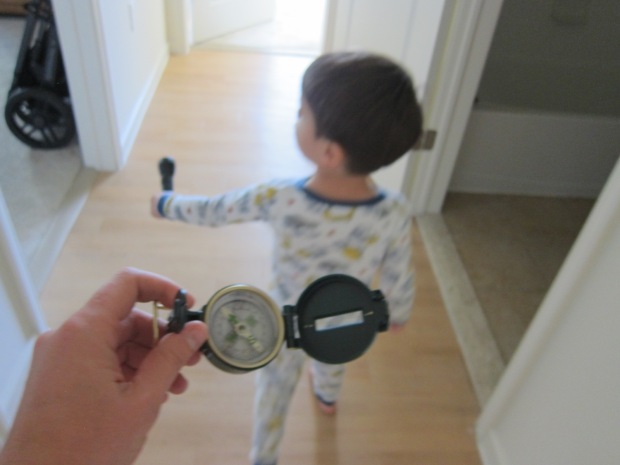 We also talked about which discovery we liked best. Travis settled on the Nazca Lines, so we dug up a few online video clips.

Finally, we headed to the library for intro to archaeology books, although the material was aimed at elementary schools kids rather than preschoolers.

Excited to see where Early Explorers takes us next! 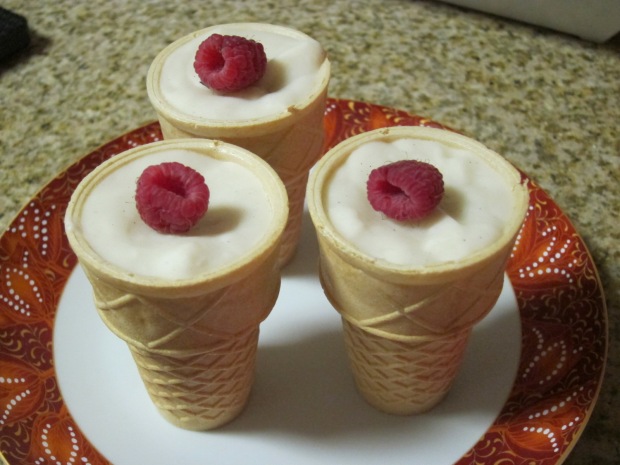 Why is it that so many things just seem to taste better frozen? This dessert recipe is a snap to put together, and my son’s favorite treat during story time. The ice cream cones from Edward & Sons are vegan, and available in most health food stores. For an extra rich treat, I use almond milk yogurt from Kite Hill, but any non-dairy yogurt would work fine. 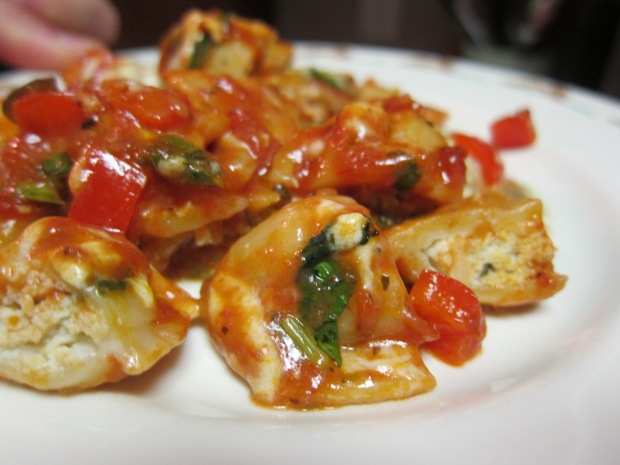 I love getting my son in the kitchen with the kid-friendly recipes from High Five magazine, and this month’s recipe was particularly ingenious. Lasagna made with ravioli instead??? This is a hack grown-ups are going to want to steal as well! Vary the amounts or types of veggies below, to suit your family’s taste.

You can’t go wrong with kids and open-faced sandwiches. For my preschooler, I like to use the sliced sourdough bread from Rudi’s Bakery, since he doesn’t like bread too crunchy. Older kids and adults would love these sandwiches on a fresh loaf of sourdough from your local bakery!

I like to serve these with fries (I love the frozen line from Veggie Fries) and roasted Brussels sprouts tossed with a little olive oil, salt, and black pepper. You know you have a hit when your preschooler cleans his plate!

After our recent pine cone bird feeders didn’t get much nibbling from neighborhood birds, we wanted to give our feathered friends more of a perch to stand on while having a late autumn snack! This project from Barefoot Books is a great way to recycle juice or non-dairy milk cartons.

Adults, cut a rectangular opening in one side of a clean, empty carton, making sure it’s about 2 inches from the bottom of the carton. 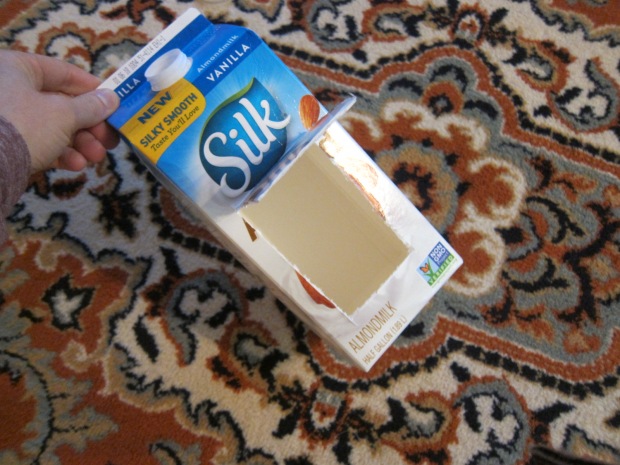 Now give your child carte blanche to decorate however they please. We wanted to make our carton bright and vibrant for the birds, so added colorful buttons and pom poms.

And then Travis decided we needed glitter… lots of glitter!

At this point we left the carton to dry overnight. The next day, poke two holes in the bottom of the carton. Select a stick from outside to be the perch; insert through the holes.

Use a hole punch to make a hole in the top of the carton, and thread with string. My milk carton was so thick that I ended up hot gluing the string instead, which worked in a pinch. 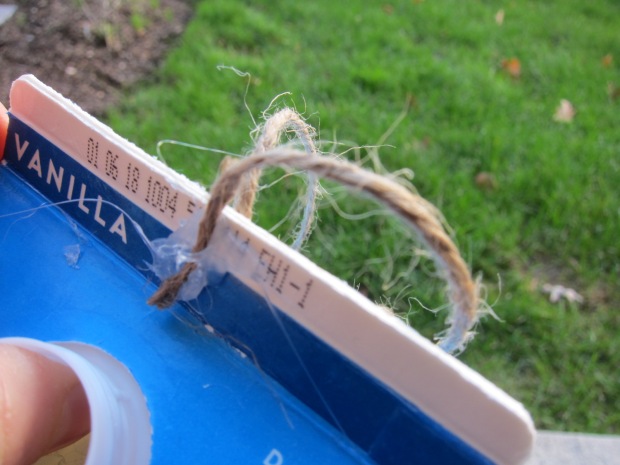 Now find a beautiful place to hang it, and fill with  birdseed!

To continue the fun, consider purchasing a kid-friendly field guide to birds, and check off the visitors you receive over the winter.