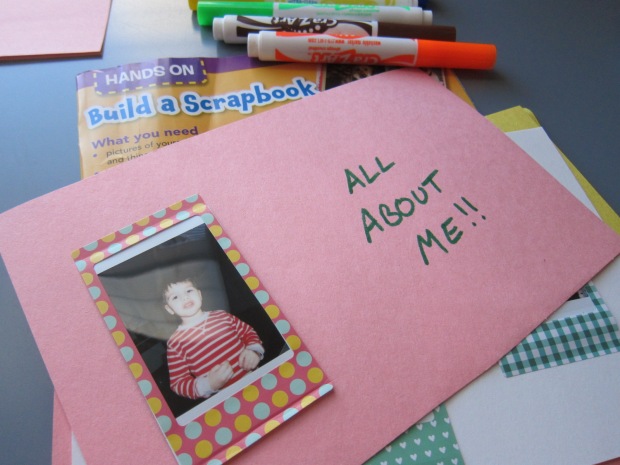 If kids love books, then kids adore books about themselves. This cute scrapbook idea came from Ranger Rick Jr., and was the perfect indoor activity for a cold winter afternoon!

First we needed to take pictures, which was by far the most exciting part of the whole project for Travis. An instant camera is so great to have on hand for moments like this; we love the Instax instant mini camera. 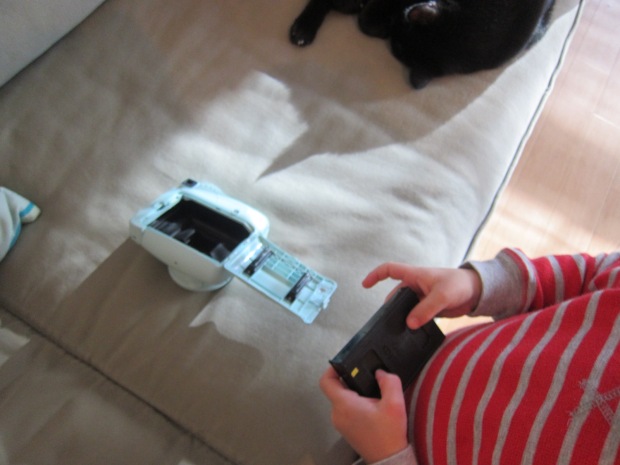 Travis proudly helped load up the film, decide which items around the house needed to be captured on film, and of course pointing and shooting.

Once we had about 20 photos, we sorted them into categories, such as family members, daily activities, and favorite things. 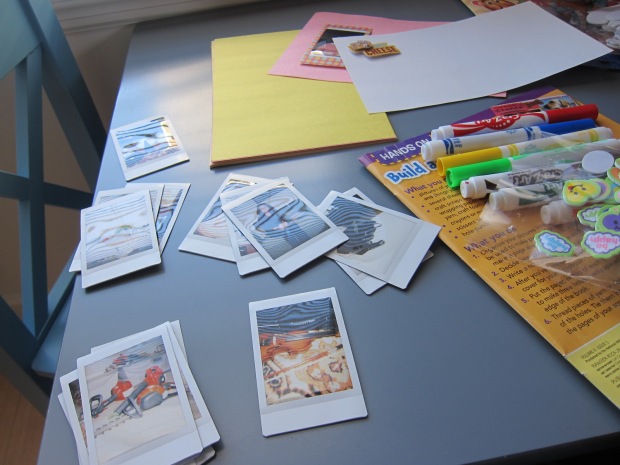 How you arrange your scrapbook from here is up to you! We affixed pictures onto colorful construction paper (cut in half, an easier size for little hands to turn the pages). You could also decorate plain white paper with wrapping paper scraps, or marker and crayon designs. 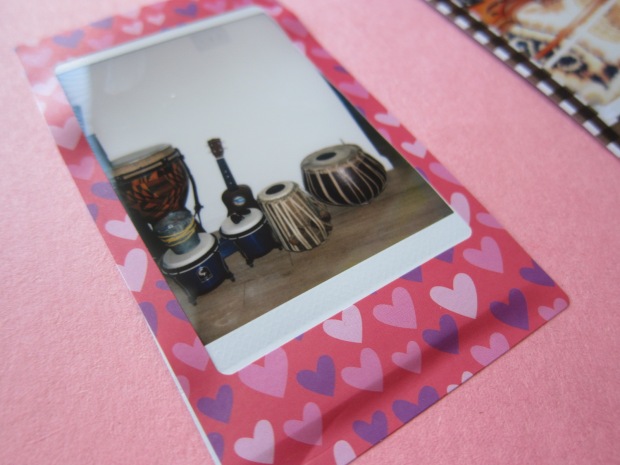 I helped with the layout and writing on each page, and Travis added stickers. 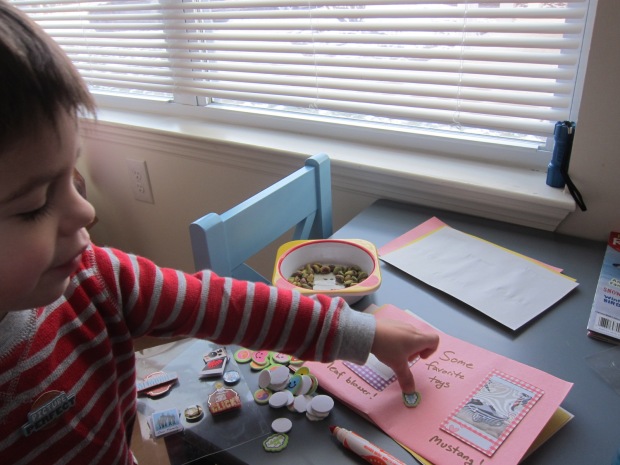 To bind your scrapbook, punch out holes with a hole puncher and tie together with colored ribbon. 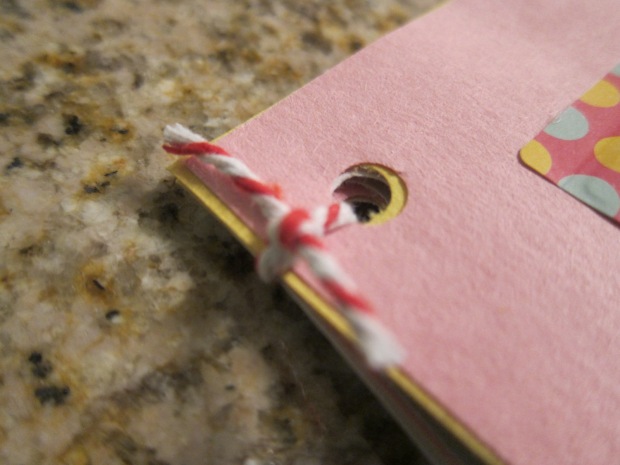 The best part was curling up for a nighttime read of the book. Travis was so proud pointing to the pictures he’d taken! Definitely a treasure that we’ll leaf through again and again. 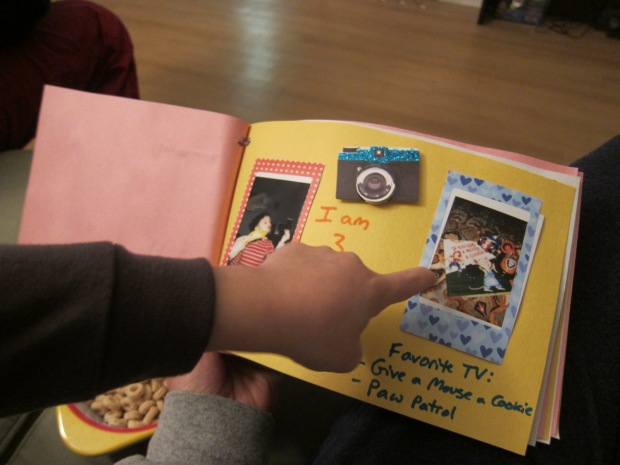 What pages would you include in your child’s scrapbook? Please share in the comments! 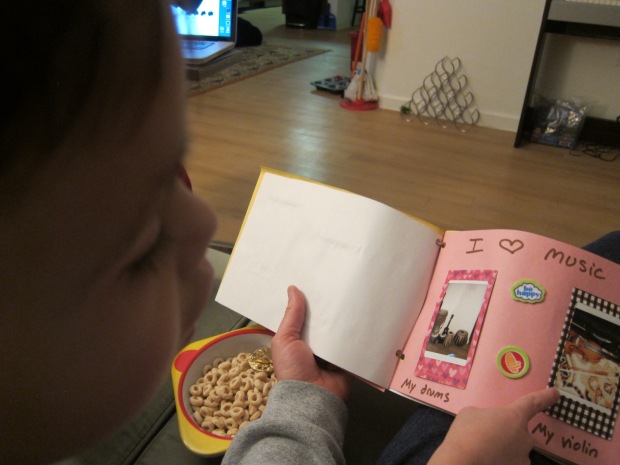 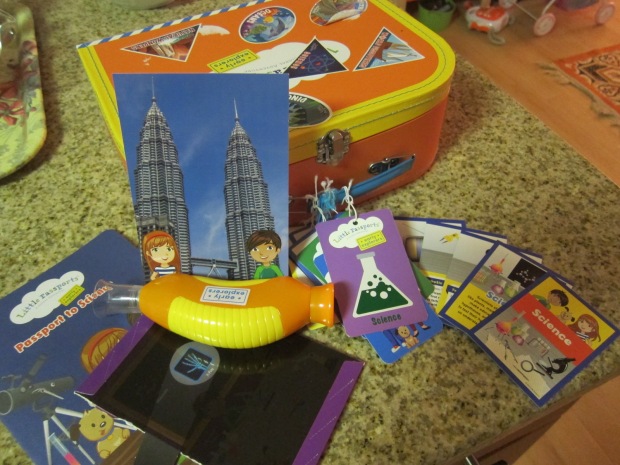 We were thrilled to discover our packet from Little Passports this month was all about science around the world. This topic lined up perfectly with Travis’s interests, so I knew it was going to be a big hit. As always, we received stickers for our world map, trivia cards, a flashlight game, and a tag for his suitcase. The Science activity booklet was so enjoyable to go through together, touching on everything from atoms to x-ray bones to historical figures like Einstein and Marie Curie. 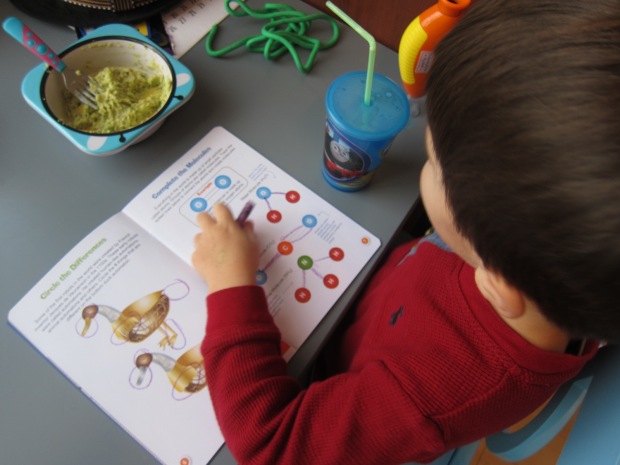 “Craft” is a misnomer here; every suggestion in our booklet this month was more science-y than artsy! Still, it was a neat project to put together to learn about how clouds form. I told Travis the pointers from the booklet: warm air cools quickly and misty water vapor forms – think of your breath on a cold winter day. Then I asked Travis if he’d like to recreate cloud formation at home.

To do so, fill a large aluminum can halfway with crushed ice. Sprinkle with about 1 tablespoon salt. 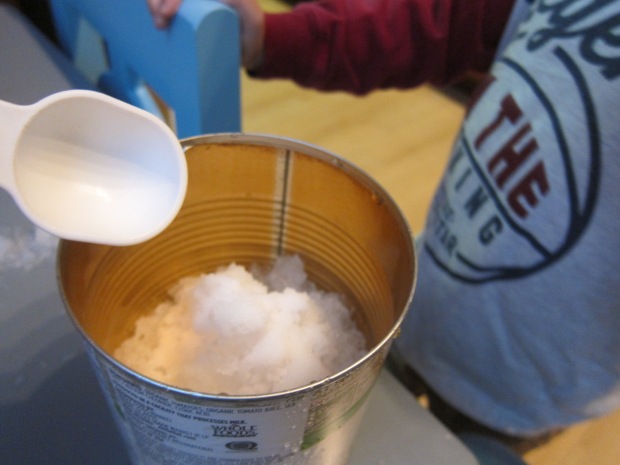 Place a small aluminum can inside the large one and let it get cold. Now blow into it. Ideally, you’ll see steam (water vapor) appear as your hot breath hits the cold can and cools down instantly. 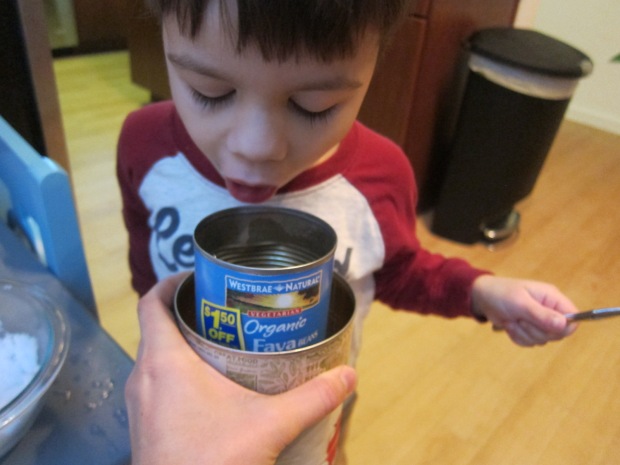 Alas, as is sometimes the case following Early Explorer’s instructions, we didn’t have much luck. But Travis loved spooning around leftover salt and ice.

The next suggestion was a much bigger hit, investigating the make-up of milk (which is part of what helped Louis Pasteur invent his famous pasteurization method). Vegans: Look for a fatty non-dairy option or this experiment won’t work. We chose hemp milk, with a nice 5 grams of fat per serving.

Pour 1/2 cup milk in the bottom of a shallow bowl. Add drops of food coloring in three or four different colors all together in the center of the bowl. 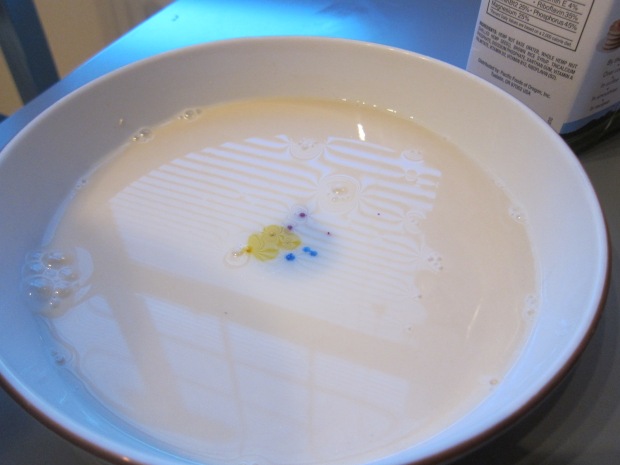 Dip a cotton swap in dish soap, then simply hold the soapy end into the food coloring (don’t stir!). The color will run away from the soap and disperse through the bowl, as the molecules in the soap move to bind with fat molecules. 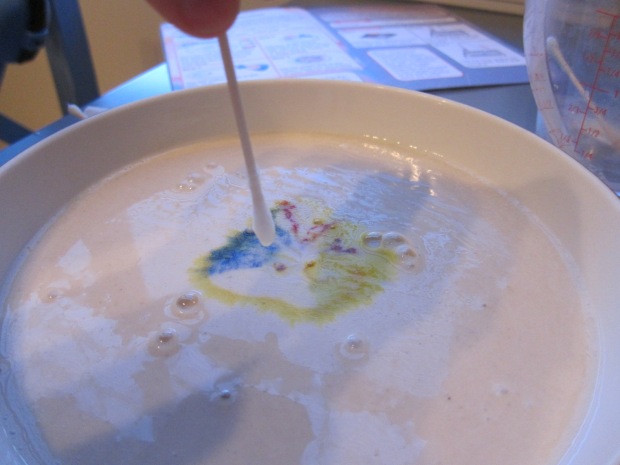 Okay, maybe mama thought this was way cooler than Travis, who had equal amounts of fun just stirring and making beautiful swirls through the milk with the cotton swabs. But we had to repeat the experiment about 4 times before he’d had his fill! 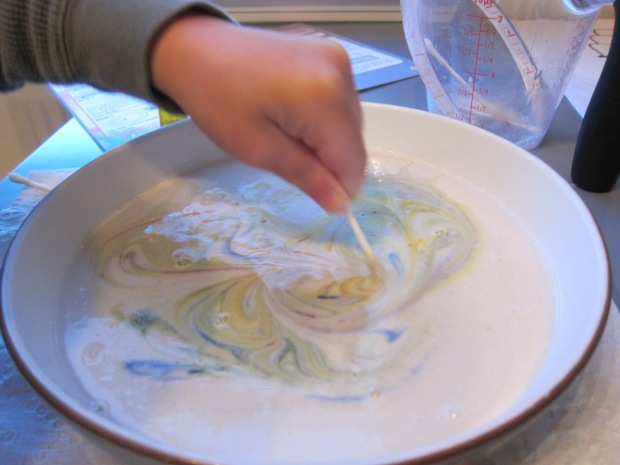 Our gift from “Max and Mia” this month was a microscope, pretty much Travis’s dream item! There was a page in the booklet designed just for it, to peer closely at images of seaweed and fish scales. 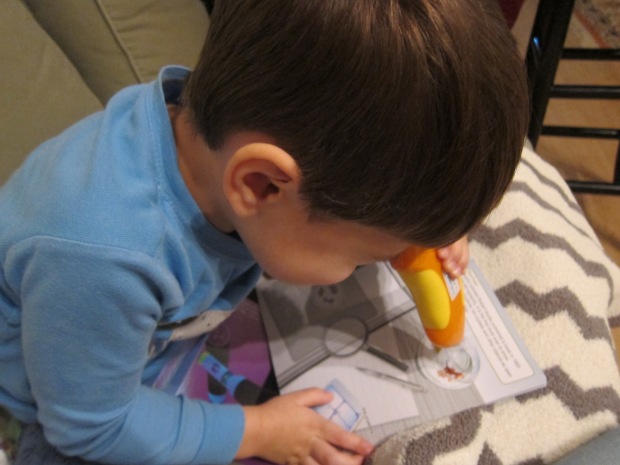 We tried it around the house and outside, where unfortunately it didn’t work quite as well. Travis loves it though, and it saved the day when we had to lie low with a stomach bug. 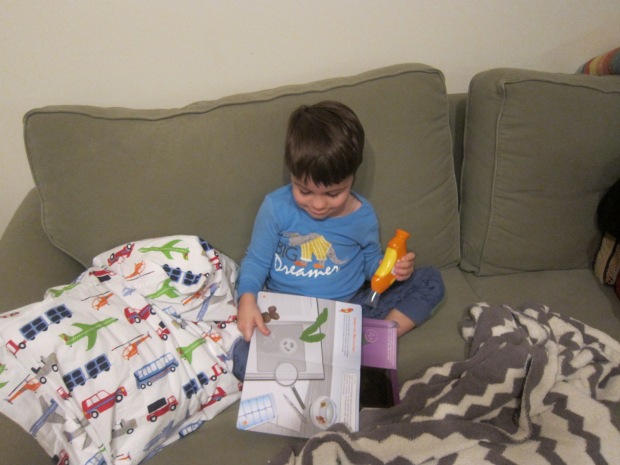 We had to head to a science museum of course! I wanted to visit one which Travis had never been to before, so we made it a special event, driving a bit out of our way one afternoon over winter break. Science museums introduce kids to so many topics that it’s hard to tell if they’re learning or just overwhelmed in the chaos, but Travis loved so many stations at the museum including: gears; 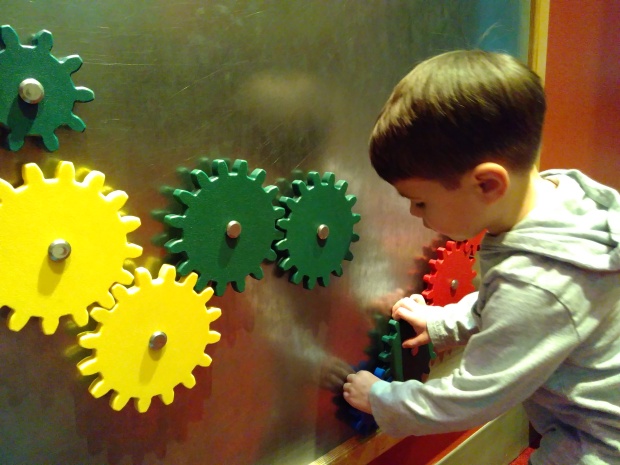 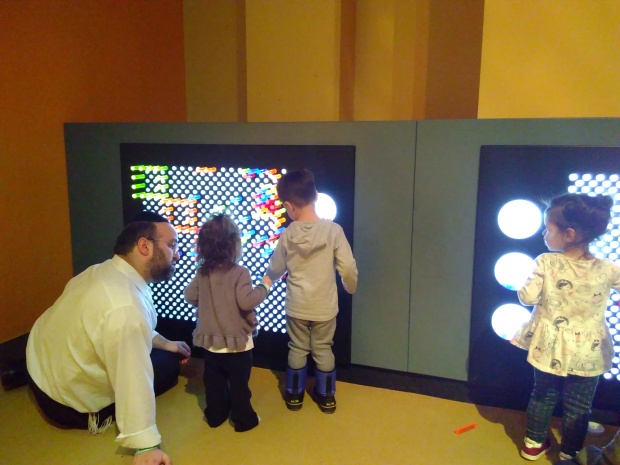 A giant air vacuum tube; and so much more. 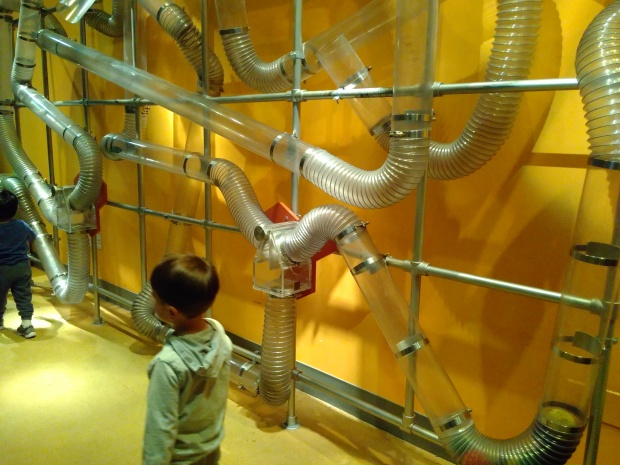 The booklet included one final science experiment that unfortunately didn’t work for us: Generating static electricity to move a thin stream of water. 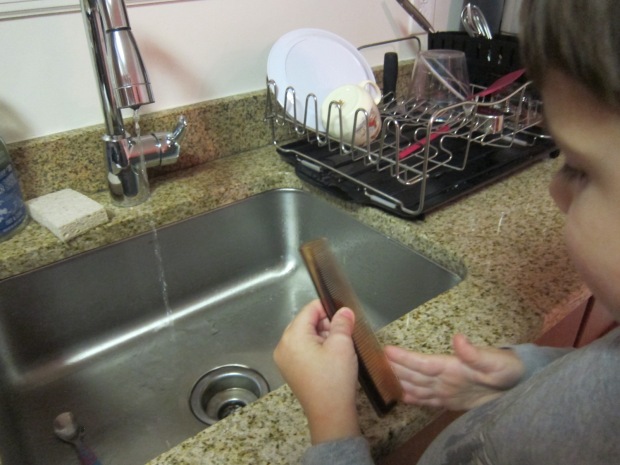 This sounded so neat, but whether we rubbed a comb on a sweater or in our dry hair, we didn’t generate enough electricity to make any difference to the trickle from our faucet… 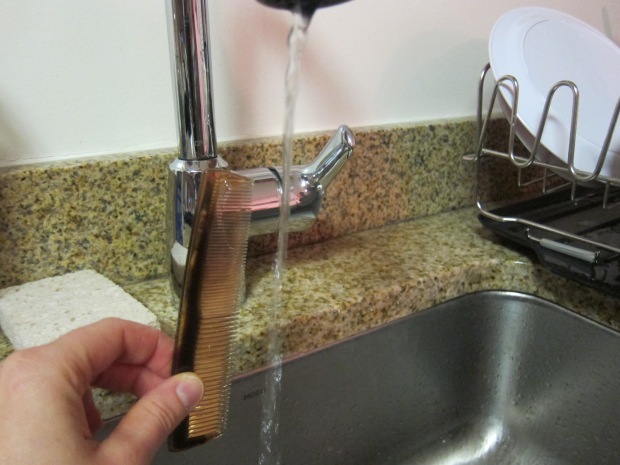 We were so into the Science topic, though, that I trolled Little Passport’s blog for other experiments. A few we had done before, but oldies can be goodies. First we repeated the old trick of invisible ink made from lemon juice. Squeeze half a lemon into a bowl and add 1 spoonful water. Use cotton swabs to make secret invisible messages on white paper. 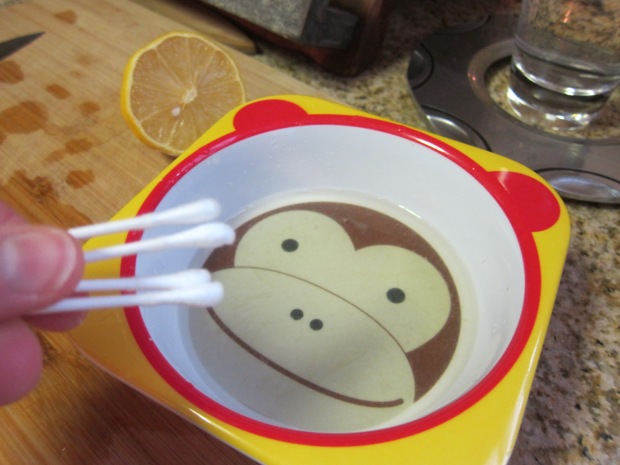 Let dry, then hold up to a light source like a candle (be careful if using a real flame) or lightbulb. 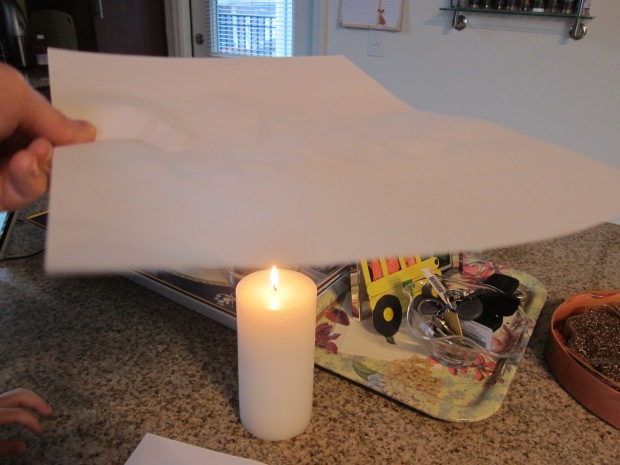 This works because the lemon juice leaves acid behind, which browns faster than the rest of the paper when held near a heat source.

Meanwhile, other activities were so awesome they merited blog posts of their own, such as a leak proof bag: 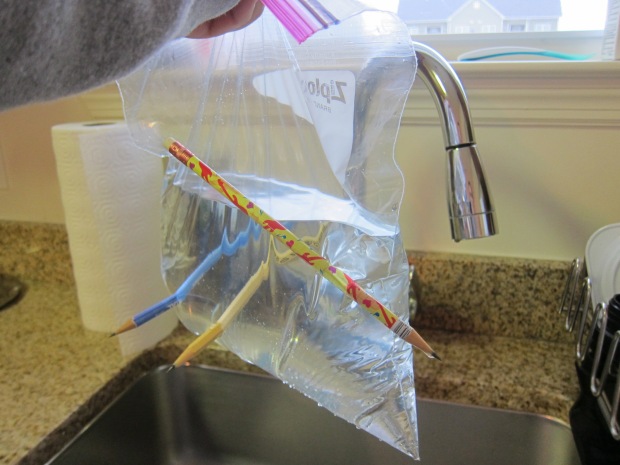 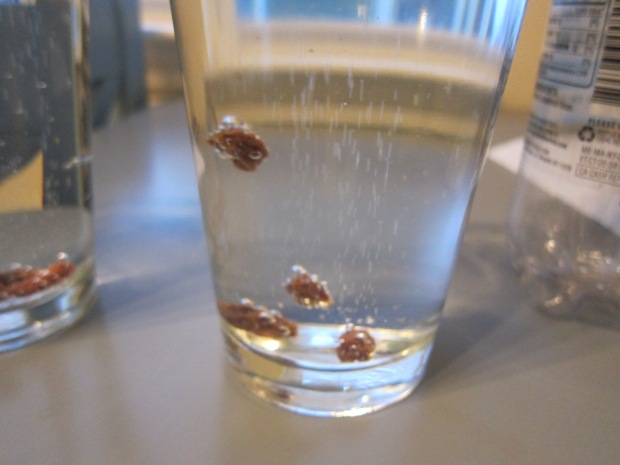 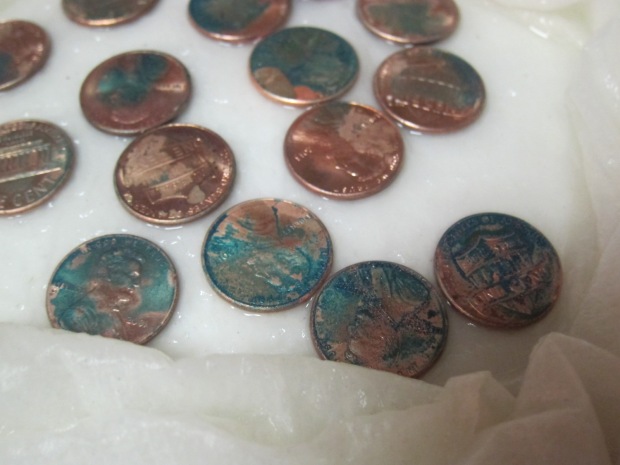 Finally, we pretended to be like DaVinci, who (apparently!) had all the same obsessions as my son – helicopters, scuba gear, airplane wings, and clocks. So we sat down to sketch “inventions” such as those four featured in our booklet. Travis said he was designing a parachute with ten handles – he’s got the right idea! 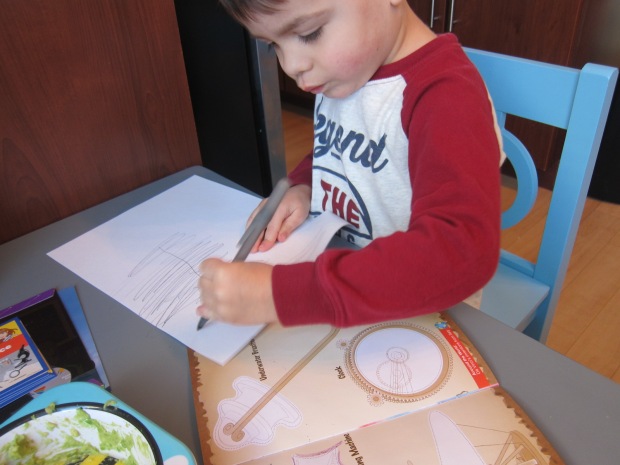 Overall, definitely the best packet we’ve received in our Early Explorer’s journey thus far. Can’t wait for the next!