I’ve hesitated to give Veronika play doh until now, full knowing she would do a taste test. But we received mini containers of it as a birthday party favor so we had some (very!) supervised play doh play today. Note: I highly recommend the all-natural eco-dough as an alternative or a homemade batch in a pinch!

Today, I pressed the vivid play doh colors into flat pancakes on her high chair tray, and showed her how she could smoosh magnetic letters down into the pile.

She tried this a few times, but then was far more into the little play doh containers themselves!

She did indeed reach her little fingers in and give it a taste, which earned a quick firm “no”.

There was lots of opportunity to talk about colors here, both in the play doh and the letters, as well as to have fun with the letter prints that appeared when we lifted a letter up. 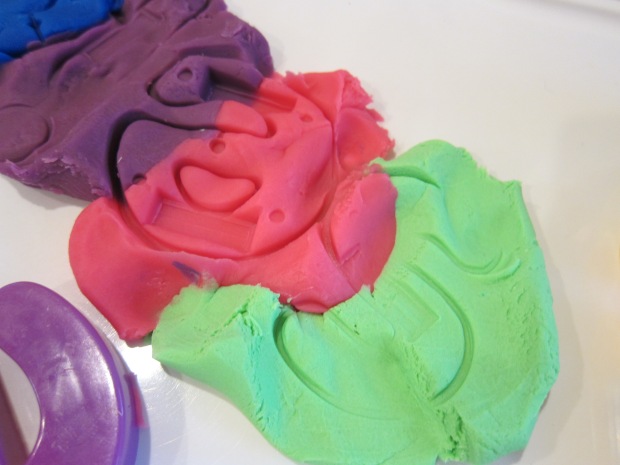 This was a nice first intro to the material, which I know she’ll play with lots more as childhood continues! Don’t have play doh at home? Here’s another way to play with those magnetic letters! 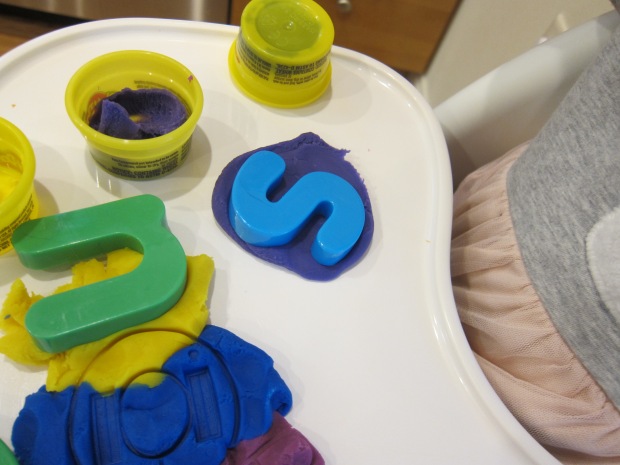 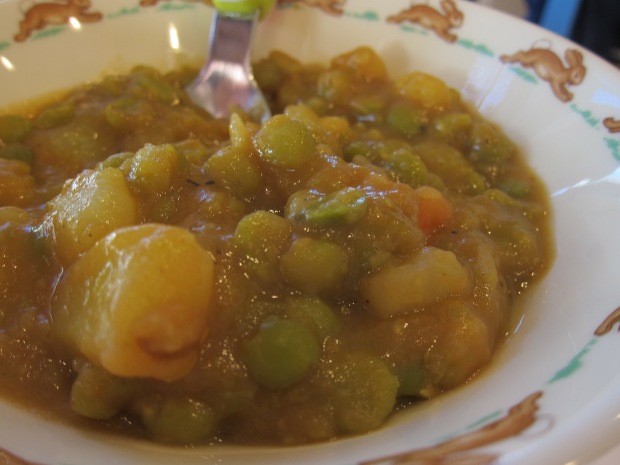 Travis still complains of bad dreams, though we’ve tried everything from worry dolls to dream catchers to fancy night lights to make his room feel safe and cozy at night. The fun play on words earned a laugh when we spotted this craft in Highlights magazine, so it was worth a try to see if Sir Lights-a-Lot can guard against bad dreams!

Cut gray cardstock to size so that it fits around an empty oatmeal container. Glue on and let dry. Cut a hole through the paper and container once the glue is set.

Cut a visor shape and a feather plume shape from additional cardstock. We used a fun bright orange for the feather! Glue these onto the container. (Alternatively, poke two brads through the visor to attach over the hole).

Attach wiggle eyes to the ends of curled black pipe cleaners and glue on so they dangle down and show through the visor. This step was a bit tricky, and I found it was easiest to use hot glue.

We added a few lines of blue washi tape for a decorative finish. What a brave knight!

Come nighttime, we inserted a tea light and set him to keep watch.