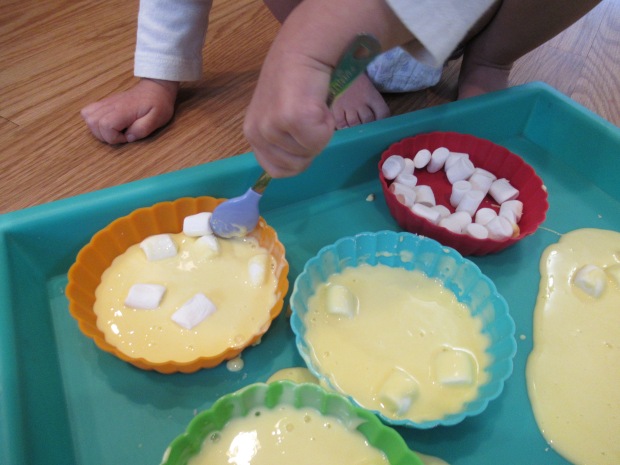 I’ve long known that Jell-O is not vegan, so we don’t bring it into our kitchen for projects. But believe it or not, the company’s pudding contains no gelatin! I was so glad to learn the fact since it meant we could put together this amazing edible slime from Crafts4Toddlers. The banana smell is fantastic, the texture is so fun, and it will no doubt lead to lots of slime play in the kitchen.

To start, combine 1/2 cup cornstarch and 1/4 cup banana pudding mix in a bowl. Add 1/3 cup warm water, stirring to combine, then add an additional 1/2 cup cornstarch, mixing with your hands. Note: I found I needed to add just a touch more water, too, or the mixture was too crumbly. Once you can squeeze it enough to come together, you have banana slime!

For a final touch, stir in a few mini Dandies marshmallows. I then set the slime down in a tray, along with little cups and spoons, and a few extra mini marshmallows. These double not only as an extra sweet treat to nibble on, but also a fun element to add into the slime as your toddler plays.

Interestingly, our mixture was almost like ooblek, going back and forth between solid and liquid states depending whether we squeezed it…

…or let it ooze down into containers. Crafts4Toddlers appears to have a mixture that was closer to playdough, so fool around with water-to-cornstarch ratio and see where yours ends up! Meanwhile, Veronika adored the stuff and loved spooning it up…

…and then watching it dribble back down.

She kept quite busy pouring it from container to container.

The marshmallows were great because she could press them into the slime, leaving an indent, then lift up and watch the indent quickly close back up again.

Inevitably, she wanted a nibble. She looked so confused after trying the slime, which no doubt tasted strongly of cornstarch, but a marshmallow quickly solved the yucky problem! 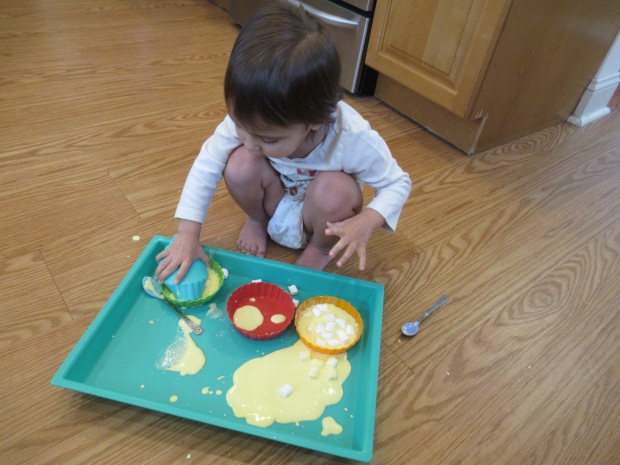