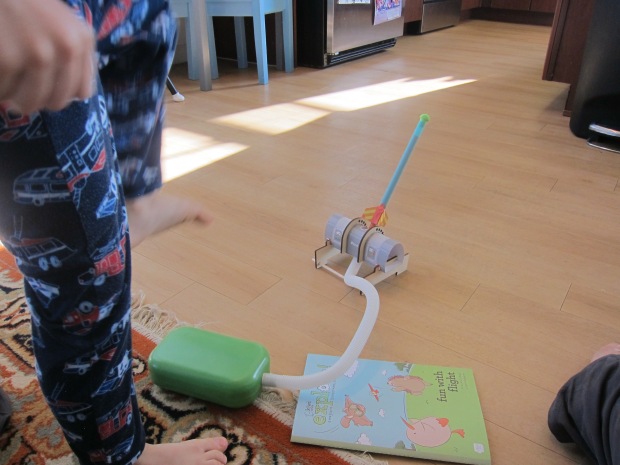 Travis’s latest from Kiwi Co was the Fun with Flight Crate, featuring projects that delved into the multitude of ways humans have devised to fly. I will start by saying that this one was frustrating for a five year old. The projects weren’t hard to put together, but they didn’t stay together that well. It led to frustration and disappointment, so do be prepared if your children are also on the young side.

First up, he got to Build a Rocket Launcher. The mechanics involved folding a cardboard launcher base and inserting it onto wooden legs (the base clicks into place).

Travis helped push a dowel through, slide elastics onto the dowel, and insert a foam tip into the launcher tube.

This tube then attached to the provided air pump and hose. Whew! Confused yet? 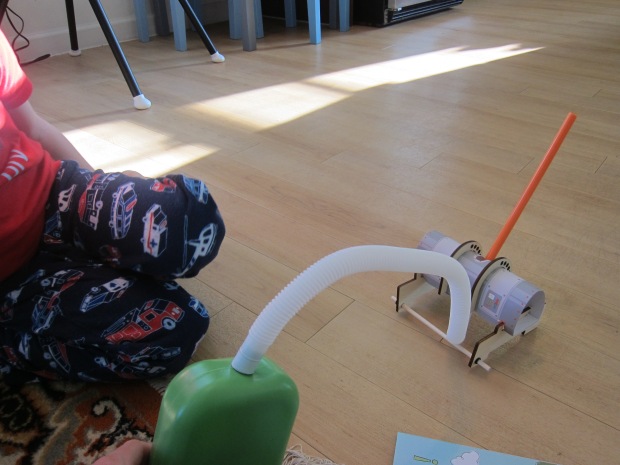 Note: This pump did not stay attached to the launching tube well at all, which was vexing for both five-year-olds and grown-ups! I’m not sure if this was a flaw in Kiwi’s design, or an error on our part.

But now we needed to Build and Launch Rockets. Travis accordion-folded the provided tail fins. 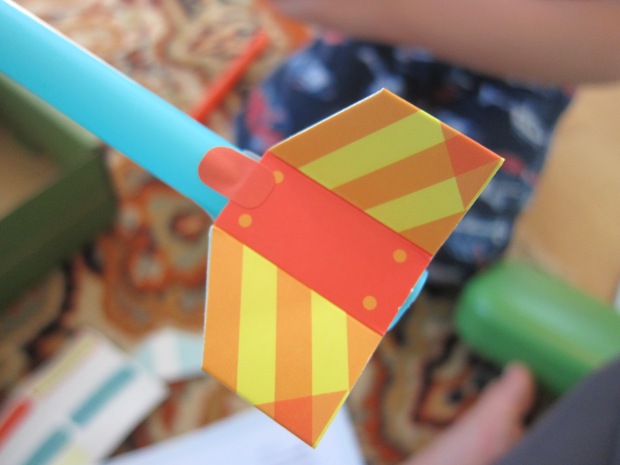 This fin is supposed to attach to the “rockets” (wide straws) with stickers, but the stickers were not very sticky and each rocket really only got one or two trips before it all starts to fall apart. 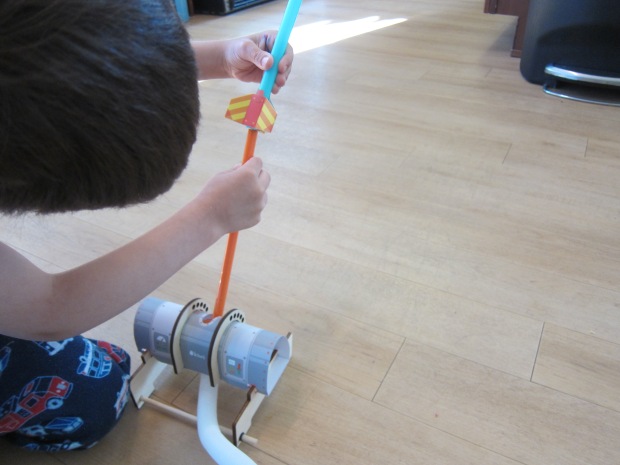 Still, there was a moment of pure joy. These things flew high, as you can see in a quick video.

Alas, our rockets fell apart before we had time to play around with experiments, like adjusting the angle of our launching tube.

Next up it was time to Fly a Kite. Travis was so proud coloring his in, selecting which color should go where. 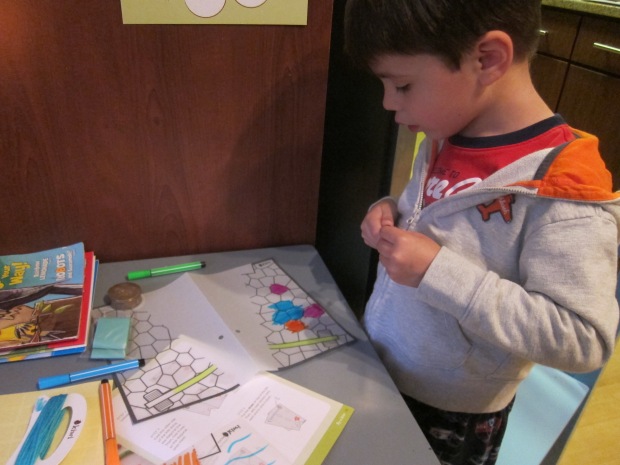 I colored the second template. Fold these along the dotted lines, until the two dotted line parts are touching (hopefully this visual helps).

We secured with the provided clear stickers in our kit. 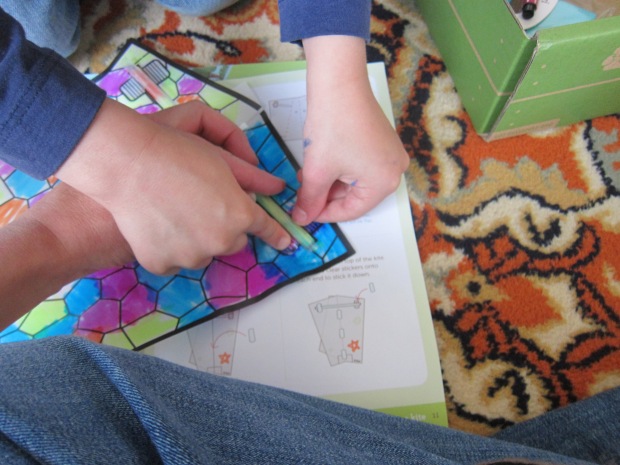 Finally, thread the provided string through the hole in the bottom of the kite. 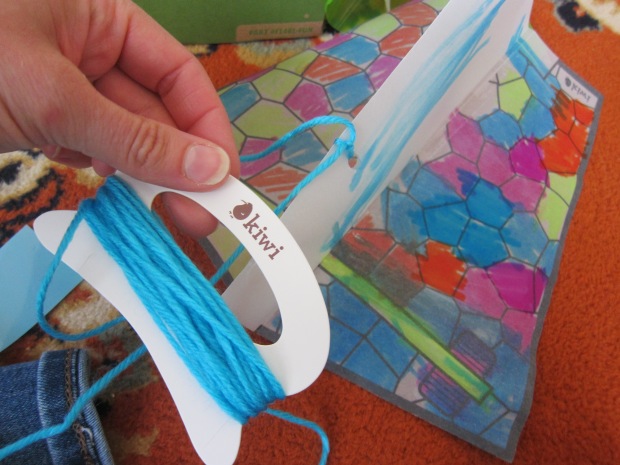 It turns out, there’s no need for wind with this kite. In fact, although it was beautiful when we took it outside on a windy day, the kite didn’t fare so well, and was quickly buffeted and tossed about. 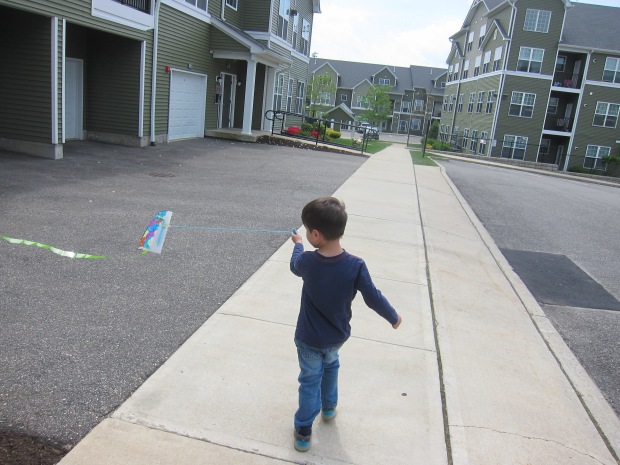 Inside, though, we could do more precise experiments. First, simply run with it! A faster run = a higher kite, but this was tough for my little guy. The kite flies straight because the tail weights it down. We played around by varying the length of the tail; it was more wobbly if we flew it with a shorter tail, and did spins all around if we took the tail off entirely. 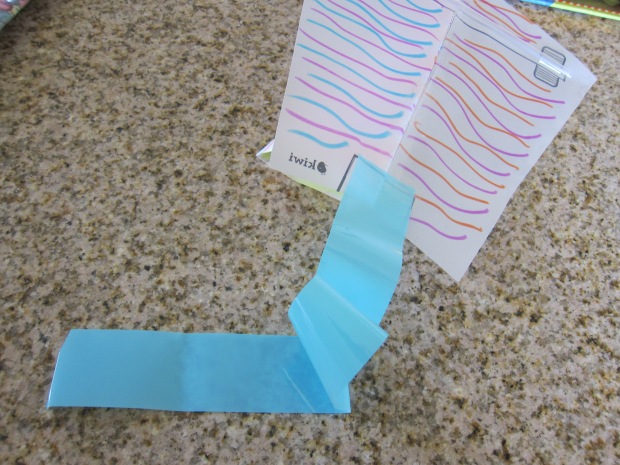 There were four additional ways to experiment with flight in the Explore magazine. To make a “helicopter,” we cut a rectangle from paper then cut a slit to the middle.

Cut about an inch in toward the center in the top portion, on either side; fold in and secure with a paper clip. Fold down the two pieces in the other half of the paper, in opposite directions. 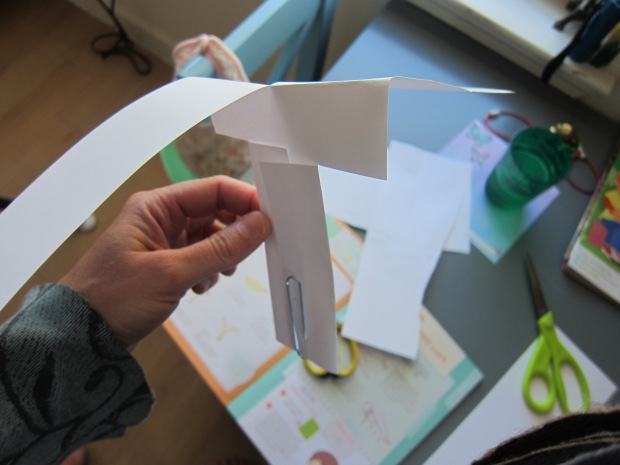 Now toss in the air as high as you can; it whirls like a helicopter rotor!

To demonstrate the lift of an airplane wing, all you need to do is cut a long rectangle and place it against your lower lip. Blow and watch the end lift up…

Next up: a flying straw! Cut two rectangles, one long and one short. Tape these into circles, and tape to either end of a straw.

Hold the straw with the small circle in the front and launch.

The circles catch the wind and create lift. For a fun comparison, we threw a plain old straw next to it, which immediately sinks to the ground.

Travis’s favorite by far was the balloon “rocket.” Cut a piece of string that can stretch between two walls, and tape on securely. Thread a straw onto the string.

Blow up a balloon but don’t knot it! Travis held the balloon tightly closed while I taped it to our straw securely. Release and watch the “rocket” zoom along the string.

This one needed quite a few repeats for my boy!

Finally, there was a tear-out paper airplane.

Because Kiwi thinks of everything, there are flaps in the back of the plane that demonstrate how a real pilot uses flaps to control lift. Fold these down and… Boink! the paper airplane nose dives. 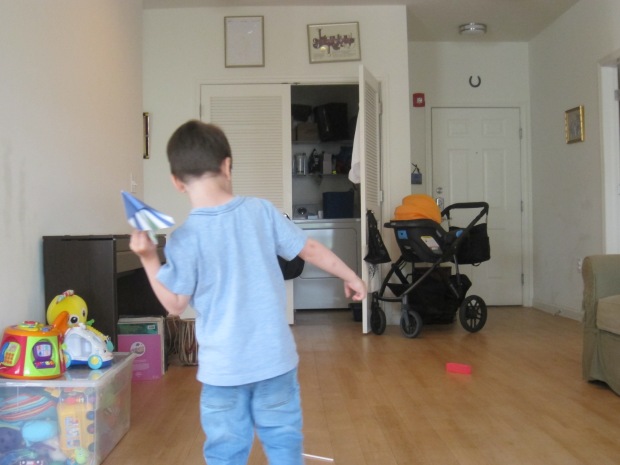 Fold them up, and it flies higher and longer – wow!

Finally, we read two suggested books: How to Make a Plane by Martin Sodomka, and Flight School by Lita Judge.

In sum, there was great stuff in this kit, both artistic and scientific, but the kite and rockets didn’t hold up well after only a few flights. 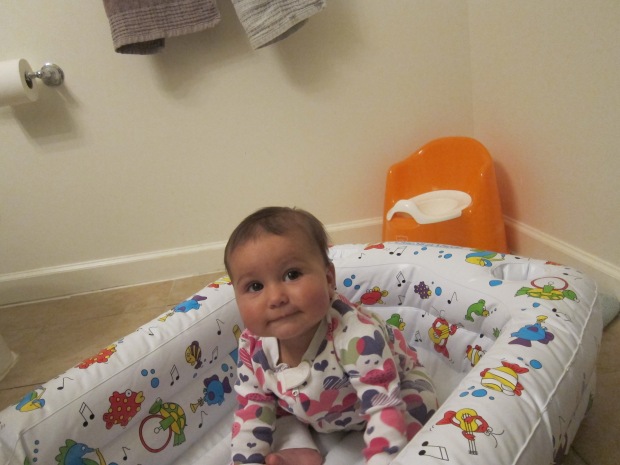 Veronika is seven months old today! These little monthly birthdays are great moments to take stock as a parent; you can marvel at how far your baby has come, and also pause to think about what’s working and what maybe isn’t anymore.

To wit, Veronika’s bedtime routine has shifted considerably since she was a newborn (when, by “routine”, I mean there completely wasn’t one!)

Now, she has a set bedtime (6.30) which allows us as a family to decide how we want to spend that last hour before bed.

No matter what your routine looks like, I highly recommend making sure there are no phone calls and no visitors. Where is my phone during all of this? Charging and on silent! 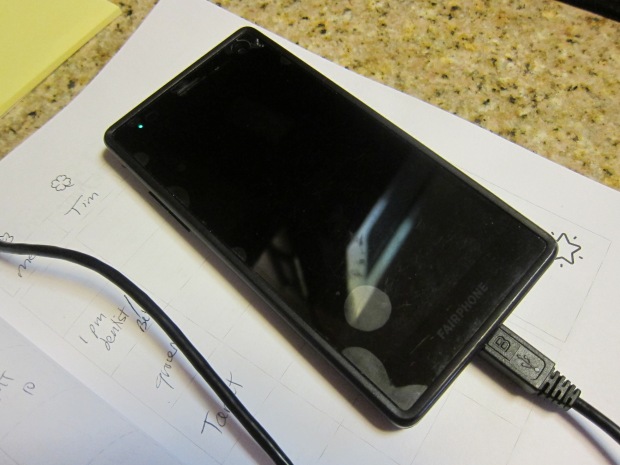 So first up, it’s time to eat a yummy dinner!

Next up is bath and jammies.

It’s okay to invite a stuffed animal friend over, of course.

We pause to read a story. Veronika likes to help turn pages.

Then she watches big brother take a bath – her dry tub makes a perfect play pen!

And that first little tooth needs a brush!

Then it’s lullabies and lights out.

Well, here’s an activity that I thought would be adorable, but as it turns out… it terrified Veronika!

The idea was to make simple “people” on your fingertips, who can then interact with your baby. Draw eyes and a smile with pen.

If you want, tape on a little bit of cotton ball hair. This one looked a bit like Mozart! Or perhaps Benjamin Franklin.

One by one, hold your fingers and have them talk or interact with baby. You can have them say bye-bye and hello, or give each one a funny voice and a different name. It’s also a great way to sing the sing the Daddy Finger song, holding up each finger in turn (pointer = mommy, tall man = daddy, ring finger = brother, pinkie finger = sister).

But did Veronika enjoy it? Nope! Her face crumpled into a frown or – worse! – tears every time I popped up a finger. Her expression went from quiet alarm: 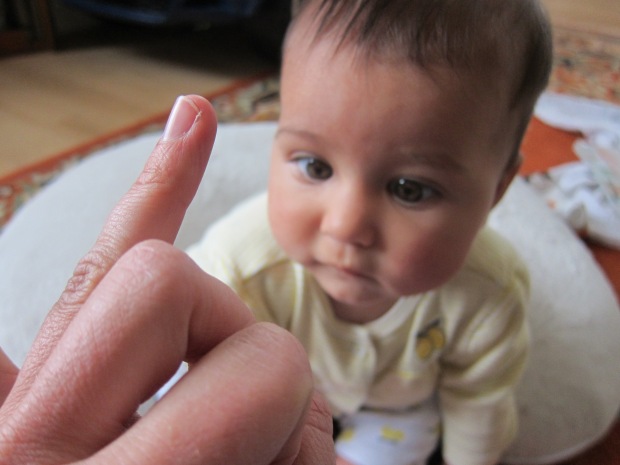 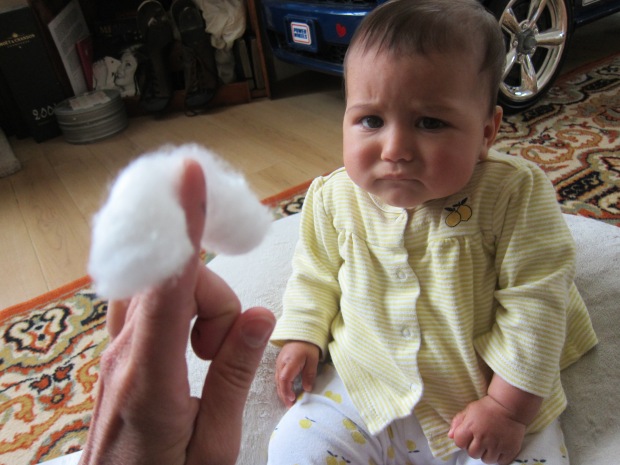 Perhaps it was just too creepy to see mommy’s fingers talking. But if your baby likes this game, please share your success in the comments!