With back-to-school just around the corner, I’m starting to put together fun supplies for Travis to help ease his transition. These fuzzy book covers, a cute idea from Highlights magazine, will make any textbook go from daunting to exciting.

Since Travis hasn’t actually received books from his new teacher yet, we practiced the craft with a favorite book from home: his nature field guide.

Cut a piece of green felt so it completely covers a textbook, leaving an extra 1/2-inch or so on the sides and top. Use hot glue (or tacky glue) to adhere the felt along the inside cover.

Cut an oval from brown felt, and glue in the center of the cover. Now you have an avocado… so we avocadon’t forget to study, as Highlights pointed out.

You can have fun with this and make lots of different fruits and veggies from different colors of felt. You could make them even fluffier with craft fur instead of felt, too!

Veronika loves her bus shape-sorter toy, with slots on top for squares, triangles, and circles, but with one caveat: she can’t open it back up to retrieve the shapes once they’re inside! I solved the problem for her today with this quick DIY version.

Use any shoebox with a lid (brother Travis’s old Kiwi Crate was perfect) and cut holes for each shape you’ll be using. Veronika loved watching me work: “Mommy’s cutting a triangle!” and the triangle had to go right in. “Mommy’s making a square!” She tested each hole as it was made.

Now all of the shapes were inside. 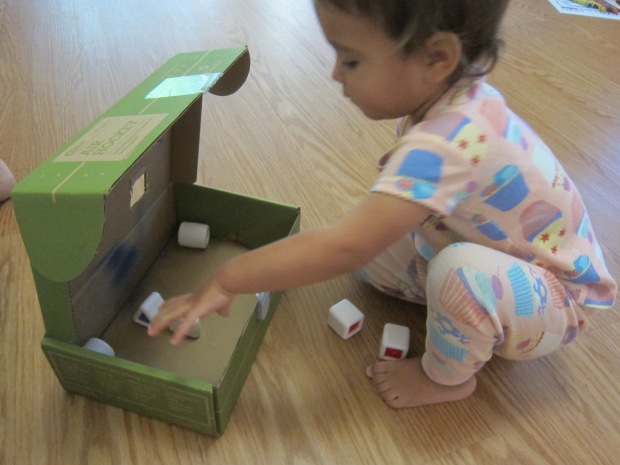 I showed her that she could open the lid… all by herself! She was thrilled. “Triangle is inside!” she said, but not for long. She took them out for a second round, now having to find and fill all three holes with the shapes in a jumble, which was a great challenge.

I loved that she could use this toy solo. She was evidently so proud of it that she wanted to pick it up and carry it around with her! 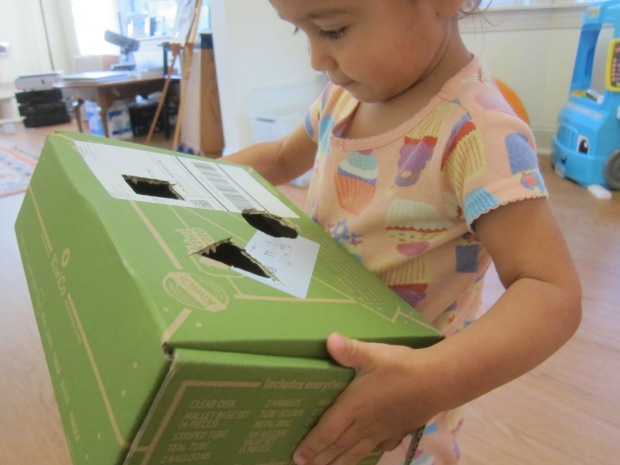 A definite hit, for almost no effort at all on my part. 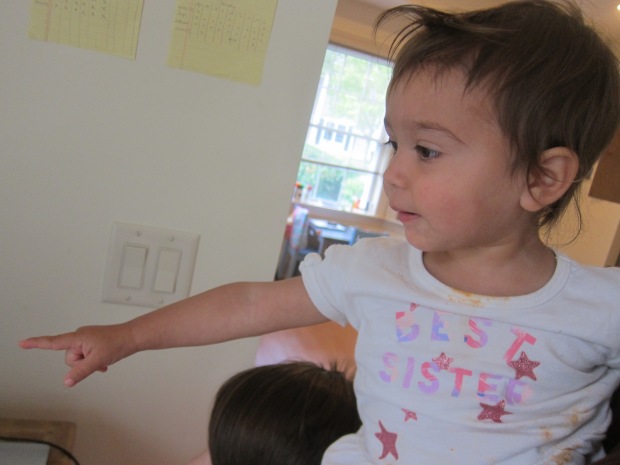 We tend to take lots of photos in our current era, but less so home videos. Here’s a cute project to encourage home video memories, as well as to promote bonding between siblings.

The idea is to have an older sibling narrate a video about any favorite destinations for your younger tot. Our first stop was the playground and Travis described where we were (with a little bit of cheeky humor!), as well as Veronika’s favorite things on the playground, and what they were having for snack.

I then filmed several fun clips as they played on the equipment together!

Once home, I played the video back. Both kids were so delighted to see themselves on screen, little mini celebrities!

They loved it so much that we repeated the game the next day on a bike trail. Travis once more narrated the scene.

And one more the kids were smitten as they watched themselves, after. I intend to keep up this activity, since it’s clear that the kids are going to treasure these clips for years to come.