In addition to making for a great learning activity, foam craft sticks are also a fantastic tub toy! You can tailor this game for toddlers up to elementary school kids.

Ahead of time, I labeled various craft sticks with the names of shapes, as well as the symbol of that shape. Make sure you have enough of each to actually form that shape So for example you’ll need 3 labeled craft sticks for a triangle and 4 for a square.

At bath time, at first I simply tossed in all the sticks! Elementary school kids can hunt them down, finding the name or symbol of each shape and then forming it on the tub wall.

For Veronika as a toddler, obviously I had to guide her through the activity. We looked at each craft stick and I asked her what shape she saw. Then I guided her hands to build them against the wall.

At first she was more interested in the colors of the sticks. But once she saw the shapes take, well, shape, she began naming them with interest. “Rectangle!” she chirped.

We went up as high as a pentagon, which was a new shape for her vocabulary, but she soon start saying, “Let’s make a pentagon.” 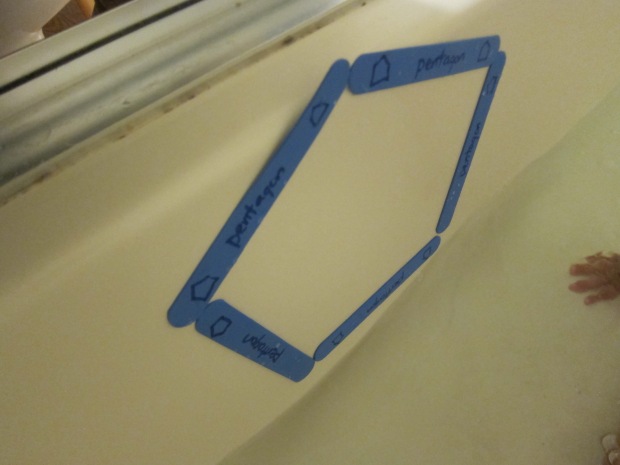 Both Veronika and big brother Travis loved seeing if we could make a circle, using enough craft sticks.

And after that, the extra craft sticks are just gloriously fun in the bath.

Today Veronika and I went on a safari. Not for animals, but for colors!

I started off the game with a big smile and told her we needed our hunting hats. She immediately picked up on the excitement, and we raided the dress-up box for a few styles.

She needed her safari gloves, too!

I gave her a little bag to fill, and told her we were hunting for colors. Since she’s not yet 2 years old, I made the game very easy for Veronika with a pile of colorful toys (balls, bean bags, blocks). First we hunted for red!

We dumped out all the red items at the end, and started again.

Could we hunt for blue? 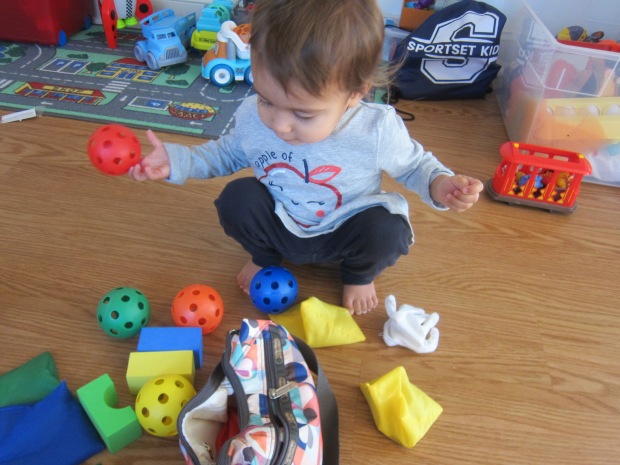 Older toddlers can wander all over the house with this hunt, filling their treasure bag as they go. Other items Veronika could easily spot were colorful magnets on our fridge, or foods from the toy bin.

This quick activity is a nice early lesson for toddlers on spotting the difference (a.k.a. the odd one out), which is a starting step for later visual perception and attention to detail.

For this super-simple toddler version, I put stickers on index cards, always using several of one kind and one oddball.

I started with a version that focused on color difference, using all star-shaped stickers: 4 of one color and the outlier hidden somewhere among them. 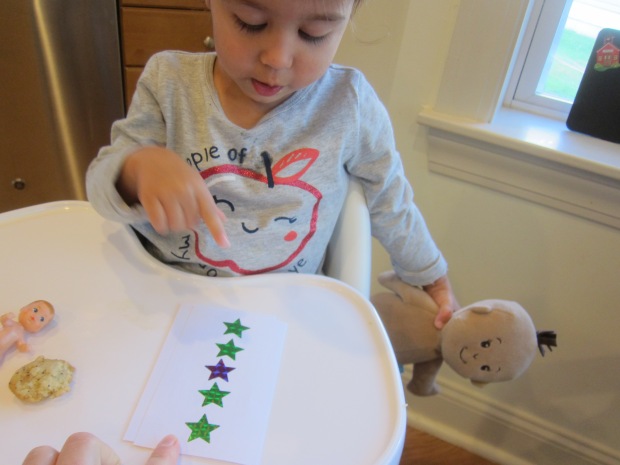 She was quick to tell me the dominant color out loud (i.e. “Green!”), which told me that her eye was quickly spotting the majority. Each time I told her, “Look, the purple is different,” to bring her focus in that direction.

Then we moved on to a version with vehicle stickers. Here, I had three of a kind and one oddball. Again, her eye always went to what was dominant, naming it for me. “I see a car!”

Sometimes I almost felt like she couldn’t see the oddball at all, even after I named it!

It became clear that the game was a little advanced for her, too, because inevitably she wanted to hold a sticker, and this was a bigger draw than my insistence on, “Look, the bus is different. There’s only one bus.”

Note: You can also draw the images, if you don’t have stickers on hand. Try smiley faces with one sad face, for example, or circles followed by one triangle. If you want your cards to be more permanent, cover them with contact paper.

One way or another, this is a fun intro to the concept.