Having recently experimented with a marble timer, Travis set out to make a modern version of an ancient time-telling method: a water clock, also known as a clepsydra. He loved it so much that he decided this would be his project for the upcoming school Science Fair. His scientific question: Can you tell time with water? His hypothesis: Yes!

For the set up, first mark two paper cups, one A and one B, with a permanent marker.

Poke a hole in the bottom of each with a pen. You want the hole to be bigger than just the nib, but not as wide as the whole pen.

Tear off a 1/4 sheet of a paper towel, and crumple into a ball. Saturate with water and place in cup B, then cover with cup A. Mark cup A with a fill line. 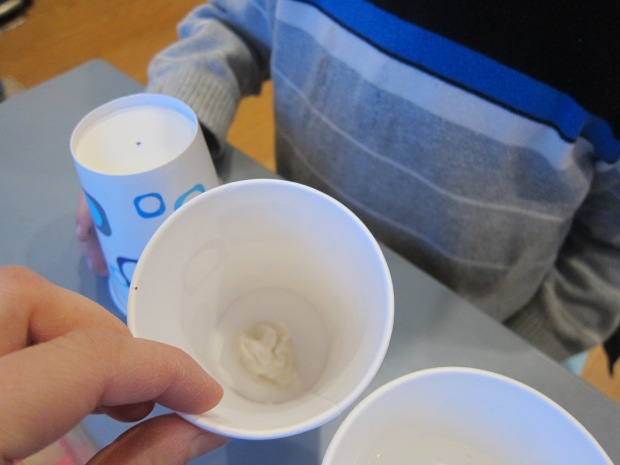 Place this whole apparatus on top of a clear plastic jar (we upcycled a peanut butter jar). Place a piece of masking tape on one side of the jar. Mark a paper cup as C and use this to fill cup A; let the “clock” run through once. 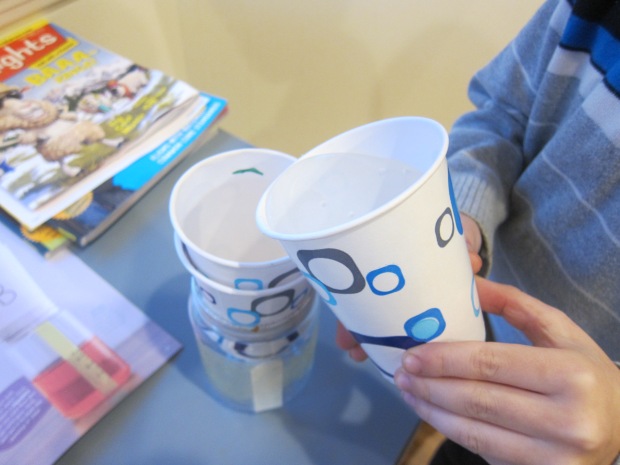 On the first try, we realized our hole was too small. The cup would have taken nearly an hour to drain!

After enlarging the hole, it was time to tick off 30 second intervals on the masking tape., We set a stopwatch and marked the water line every 30 seconds. Travis had made a 1 minute and 30 second clock!

We noticed how the second two notches were much closer together than the first two.

Travis can’t wait to talk about the project at the Science Fair! This is a great project for such an event, because it can be done over and over, simply by pouring the water back from the jar into the “C” fill cup and repeating.