Friends come and go in life, but one extraordinary thing I’ve noticed about parenthood is the way it can facilitate reunions with old friends. You may just find that the common ground of raising children brings back people from your childhood, high school, or other points in life.

So if there’s someone you’ve lost touch with who is now a parent (or if you’re new to parenthood yourself!) consider reaching out to that old friend and continue this new stage of the journey together.

To wit, Veronika and I joined an old friend of mine and her two children today on an excursion. Adults can pick up right where they left off… And meanwhile, the kids get to play! Being the same age isn’t a prerequisite; big girls loved helping with squeaky toys for eight-month-old Veronika or helping to push her stroller. 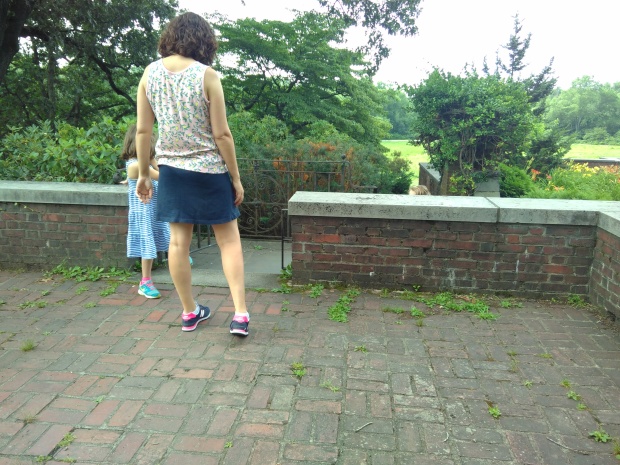 Another idea is to keep in touch with parents from your childbirth classes, if you attended them before birth. Then, all your babies will roughly be the same age.

Consider making it a point to touch base once a month, or whatever frequency works for your schedule. It will be amazing to watch all your kids grow on the journey together.

Yes you can fit in letter writing, alphabetical order learning, and gross motor skills in one activity… With ABC Hop! This simple game requires no more than a paved surface and a piece of chalk.

We headed outside early before the afternoon summer heat sets in. I asked Travis to write the alphabet. This was fantastic practice to write the letters from memory, not following a tracing line. He faltered on only a few, like K, but had a firm grasp of many others.

I quickly realized his letters were going to be too small to hop on, though, so wrote out a second set for him. Once the alphabet was complete, we began to sing the ABC Song. With each note, he hopped from letter to letter. 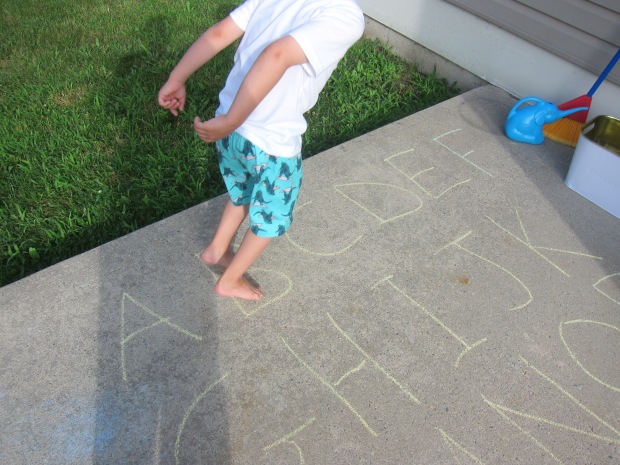 Whoops, occasionally he had to run from the end of one line to the start of the next.

I thought he might get tired, but he hopped to the very last Z.

To make this harder, you could even try mixing up the letters or putting them in zig zags occasionally!