L is an easy letter of the day for Travis to trace and we used some equally easy ways to form it today.

After tracing upper case L, I asked Travis to show me L with his left hand. He paused a moment to remember which is his left, but then flashed me an L.

Next he traced lower case l. We lined up all his crayons and I asked him to show me the longest crayon. It was a close call between pink and white, but white one. 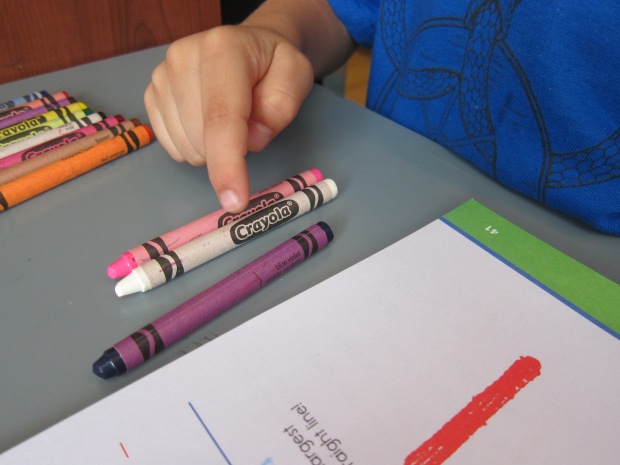 Using this long crayon, I asked him to make me lower case l – just a long line!

In anticipation of the 4th of July, Travis and I had a lesson about the American flag today, thanks to our Backyard BBQ unit from Raddish Kids. Recipes will follow soon, but for today, we had fun learning about the flag’s history and getting creative. Read on!

First I gave Travis a riddle: “I’m red, white, and blue, and starry too. What am I?” He had peeked (little cheater!) so knew I meant the flag. It’s fun at this point if you have a little flag that your child can examine and hold.

We made a chart known as a K/W/L graph with three columns: Things I Know; Things I Want to Know; What I Learned.

I asked him what he knew for starters, and he rattled off facts: the colors, the inclusion of stars and stripes, and that it’s our American flag, not another country’s.

Then we discussed what he wanted to know. I encouraged him to go deeper: why are there thirteen stripes or fifty stars, for example; why do we fly the flag. Now it was time for videos suggested by Raddish!

We looked through a few flag books, as well, for further facts. It was useful to have a world map handy so I could point out where other flags were from.

Now he could fill in the final L column. I was so proud that Travis had learned about the thirteen colonies, for example, or nicknames for the flag like Old Glory.

So now for the crafty part: designing his own country flag. Being only 5 years old, Travis’s grasp of the project was limited; his was a very fantastical flag for a “snake country.” 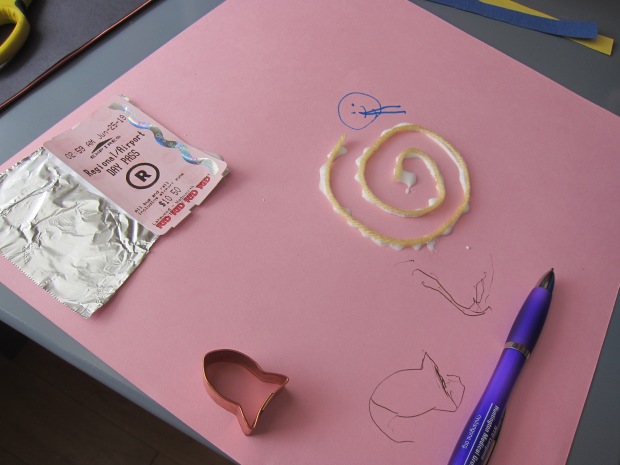 We used cardstock as the background, and of course a coiled yarn snake needed to be in the center. Using stencils was an artistic way to add “symbols”. Big kids can go more in depth into which symbols exist on real flags, and why.

A tin foil canton (vocab word)!) in the top corner added shine, though soon this was embellished with an old train ticket and construction paper.

I loved watching his creativity even though his final result was quite busy for a flag. Please share about your own kids’ creations in the comments! 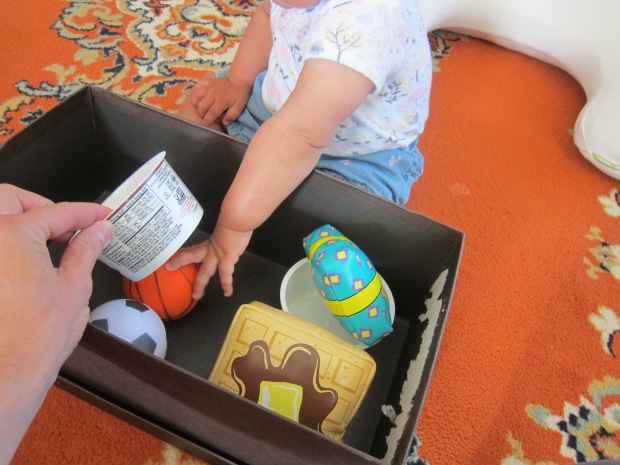 Babies just seem to love containers, especially finding one with various items inside and dumping them out. Contain that natural inclination with these variations on in and out games!

For the first version, I simply filled a shoebox with a few toys, trying to make them novel for Veronika; we had a few new squishy balls, empty So Delicious yogurt containers, and some favorite soft toys.

The entire goal of the game was for her to reach in and pull things out, then fill the box back up and start all over again. She was up for it!

The shoebox proved to be a little too big for her to lift and dump, so I eventually transferred everything to a small toy bin. I showed her how to upend this.

What a fun game, mommy!

For the next version, I got a little more technical with language learning. Use a plastic bowl instead of a box (just to mix things up!) and add different toys.

Pop beads are a fun burst of color for babies; just be sure you have these joined in secure loops, since the individual beads can pose a choking hazard.

This time, I first said, “Put in,” and encouraged her to place items in the bowl.

Then we reversed it: “Take out,” I said, each time she reached in a hand to grab out an item.

Note: ‘take out’ happened a lot more than ‘put in’, which I expected! But repeating the words each time will help your baby learn the concepts. 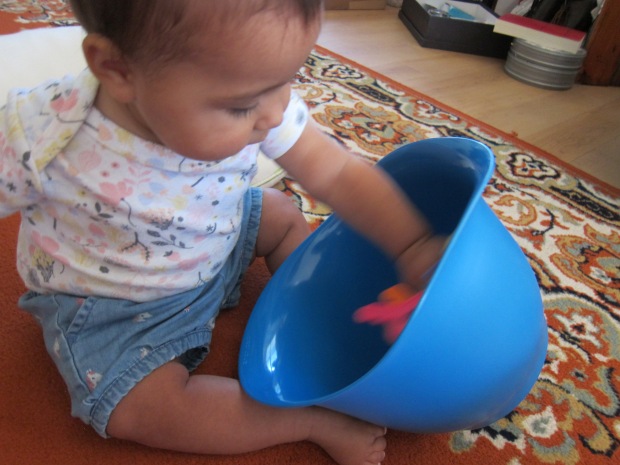 I also encouraged her to hand toys to me, using an open-hand gesture and language. 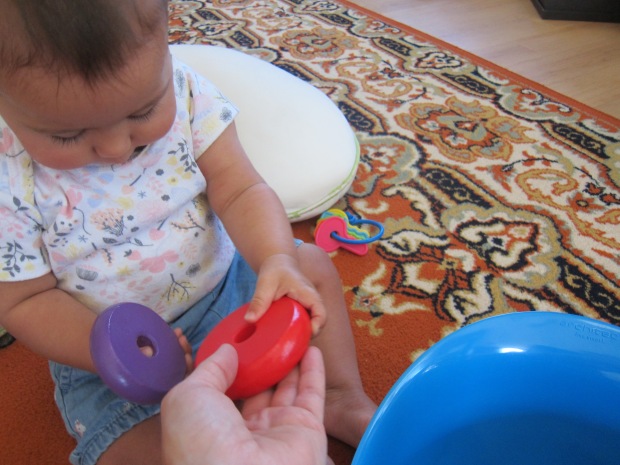 This is a great game to play on repeat as your little one nears that exciting moment of first words!