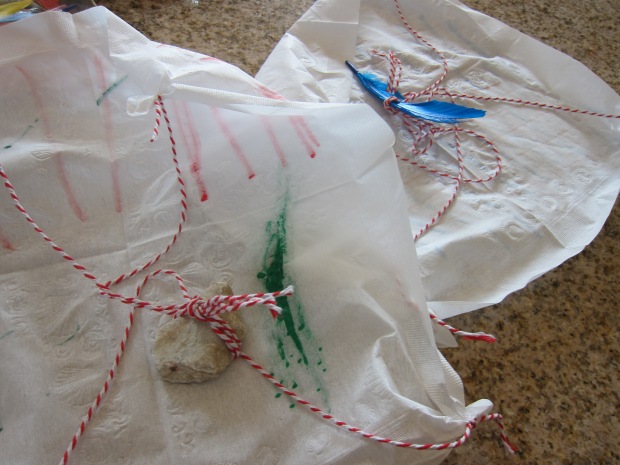 Travis and I recently made fabric parachutes that were a bit complicated and tangled easily while soaring down. Today we wanted something simpler, because the goal wasn’t so much about the parachute itself as it was to test how to make a parachute fall faster.

For our experiment, we quickly put together paper napkin parachutes.

Decorate your napkins with markers first.

Travis quickly learned that you need to be gentle drawing on napkins, and was proud when he got the hang of it!

Cut 4 equal lengths of string for each parachute, and tie around the napkin corners.

Gather the four lengths of string together in the center, and tie around any small object. Our “contestants” were a feather and a rock. But if you want, multiple toys can get in on the action; this game would be great with Lego people!

Travis made his hypothesis: that the rock parachute would fall faster than the feather one.  So we headed outside to test it out! A fenced-in overlook made the perfect launch site.

Even in a still photo you can see the feather parachute lazily drifting down as the rock plummets to the ground.

The difference here was extremely stark, of course. As mentioned, your kids might want to do multiple launches with items closer in weight. Enjoy the discoveries!