It was such a busy Wednesday that we never even got around to daily routines like the Lexia ELA platform online. But innovative ideas prompted by Travis’s K-to-1st summer workbook kept things fun and tantrum-free.

9-9.30: Math. Travis’ workbook page involved coloring in shapes (both flat like a square and 3-D like a cone), on an ice cream truck image. We made it hands-on with an ice cream playset the kids have. Travis even turned baby sister’s food truck into his ice cream truck! I had hoped to use the opportunity for more math (like addition or subtraction problems), but he just wanted to play. Not worth a battle…

9.30-10: STEAM. After an encyclopedia page on bugs (creepy-crawlies!), we watched the QR video and then made a firefly craft. We also pulled out an old bug set with a magnifying glass for further exploration. 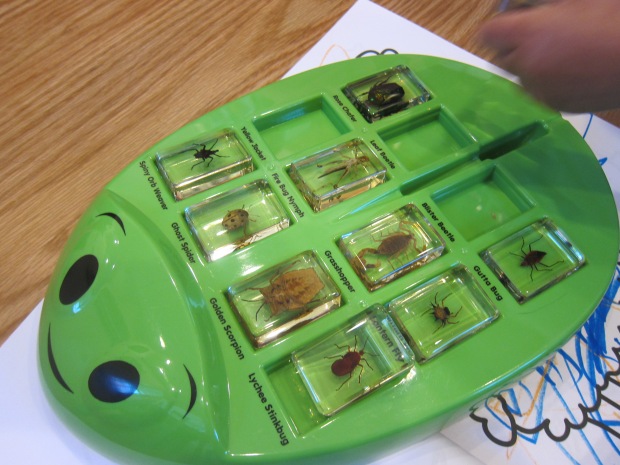 10-10.30: Snack/recess. Travis got involved with some of little sister’s tube play.

10.30-11: ELA. Travis loved writing in his Star Wars book, thrilled that he was forming complete sentences. There was also a quick page on letter H in the summer workbook.

1-1.30: Outside: In honor of National Frog Jumping Day (yes that’s a thing!) we played “jump like a frog” hopscotch.

Veronika learned to ribbit and hop, too!

1.30-2: Class Zoom! The class went around sharing what they are thankful for, and Travis thanked the bees and pollination.

2-2.30: Counting. We finished the day with a return to math because his 1st Grade Star Wars math workbook arrived and he was so excited. (I hadn’t even intended to open this up until summer!) After filling in numbers up to 120, we played “Light Saber Interrupted Counting”. One person started to count, but if tagged by the opponent’s light saber, the tagger took over. This was a great way to trick him into counting so high, purely for fun!

After that we traded in lessons for cooking! His bedtime story was a video of his teacher reading Peter’s Chair.