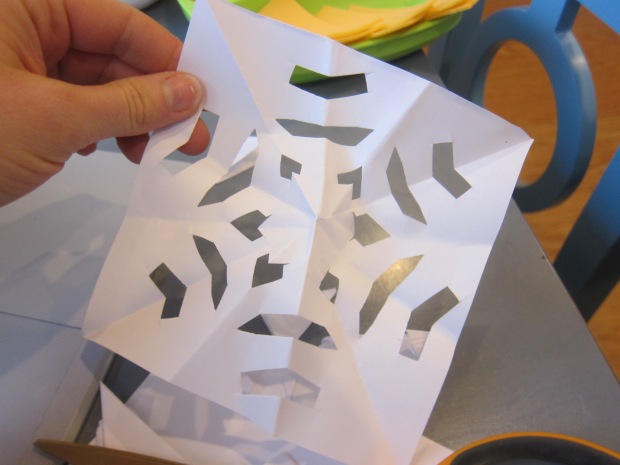 With a snowstorm outside, Travis and I tested how many ways we could make snow inside today. The answer was four, if you count cartoon snowflakes in a movie as the final way!

First, we got a little scientific and tested two homemade mixtures to see which made better snow.

In the first bin, we combined 1 cup baking soda with 1 cup shaving cream. This mixture looked a lot like snow, and had a nice chill to the touch, but didn’t clump together well.

In the second bin, we combined 2 and 1/2 cups baking soda with 1/2 cup conditioner. This mixture turned out to be fantastic! We could shape it into snow balls and build little snowmen. 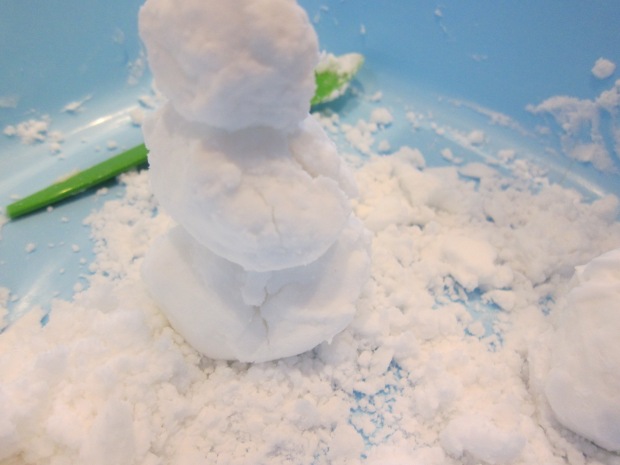 And as you can see, it led to lots of joyful messy play.

Once the mess was cleaned up, we turned to paper snowflakes. Fold a white square of paper into a triangle, then fold over itself again into a smaller triangle. Now fold this triangle up into thirds. A helpful visual on these instructions can be found here.

Begin using scissors to snip any which way, just not cutting all the way through this folded triangle. The thick paper was tough for Travis to cut, so I helped him out and we ended up with beautiful snowflakes.

They looked fantastic against our snowy window!

Finally, we watched snowflakes on the TV screen. The The Snowy Day movie is a well-done extension of the classic book by the same name. It inspired us to think of all the ways we’ll play in real snow tomorrow.  In the meantime, we’ll be here eating snowball cookies!